Once upon a time, when I was a carefree girl-about-London-town, I used to spend a lot of time at Leon, a tiny cafe in Carnaby Street with a Scandinavian-style bleached wood interior and good-for-you-but-not-too-earnest-about-it food. The waiting staff were charming, the menu was interesting and it was within stumbling distance of Liberty, Topshop Oxford Circus and the Boy Wonder’s work.

There are now lots of Leons and even a cookbook by its clever founder, Allegra McEvedy, but alas, none in little old New Zealand. But I’ve been making my own version of its Superfood Salad for so long now that I think it’s better than the original. Quinoa (keen-wah) is considered a super-grain because it’s high in complete proteins, which makes it an excellent choice for vegans, vegetarians and people on gluten-free diets. It behaves a bit like rice and millet – it absorbs twice its volume of water during cooking and has a subtle, nutty flavour. 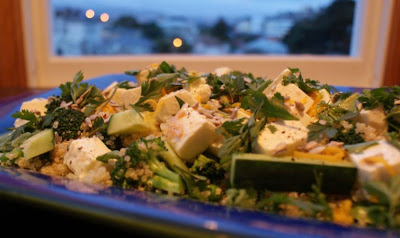 Superfood Salad (with thanks to Leon)
In the weekend I made this for Terence and Catherine, with some grilled chicken thighs, a tangle of green leaves and some flatbreads from the Italian deli warehouse down the road. Think of this as the master recipe and make your own substitutions as your garden and the seasons provide.

3/4 cup quinoa
1 head broccoli, cut into florets
1 1/2 cups frozen baby peas
200g feta, diced
1 avocado, diced
a handful or two of cucumber, cut into batons
2 handfuls of mint leaves, shredded
2 handfuls of parsley, chopped
zest of a lemon
a couple of handfuls of sesame, sunflower and pumpkin seeds (toasted in a dry pan, if you have the time and/or inclination)

Rinse the quinoa under cold running water, then put in a pan with 2 cups boiling water. Boil gently until nearly all the water is absorbed (about 10 mins). Throw the broccoli and peas in and cook until the broccoli is bright green and ‘al dente’, then drain and refresh under cold water again.
Tip the cooked quinoa and vegetables onto a salad platter, then pour the dressing over the top. Toss gently, then scatter over the herbs, cucumber, feta and avocado. Strew the lemon zest and toasted seeds on top in an artistic fashion and serve. This feeds four as a main course, but I suggest placating the carnivores with something meaty on the side. It also makes a very good packed lunch, but remember to keep it refrigerated until playtime.