Not only is the Boy Wonder an identical twin (all superheroes need a sidekick, though his would probably argue that he was the hero), but his birthday is on December 25. He has plenty of woeful tales of neglect as a result, like the year he got a pyjama top for Christmas and pyjama bottoms for his birthday.

Since we’ve been together I’ve instigated a scheme that makes December a kind of birthday month, with a series of advent-style calendars filled with various treats. One year I strung film canisters along a ribbon, the next I made little scrolls woven into a piece of scarlet fabric. The year after that I think the treats were hidden around the house. 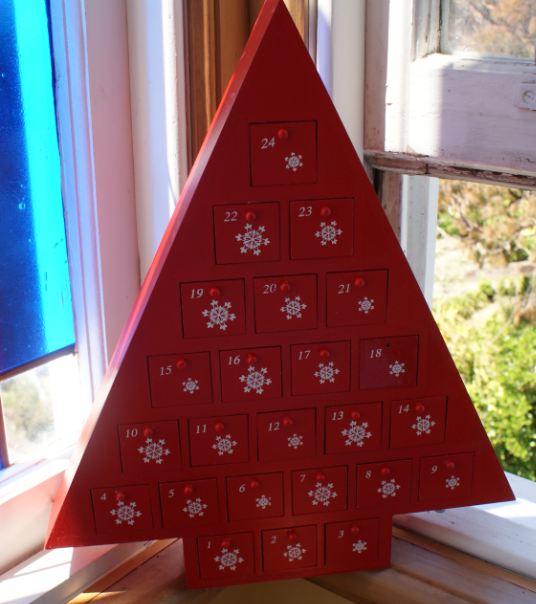 Then I found this little red house, which has tiny drawers that are just the right size for a chocolate or a note. I think the BW likes it, or at least he’s amused by the pleasure I get from doing it. Of course, there are days when I am really struggling for ideas but I’ve been newly inspired by reading about Sonia’s ‘activity’ calendars – I think they’ll be great when the Small Girl is a bit bigger.

I’m sure there are lots of other clever ones here. How are your Christmas plans coming along? And do you have any ideas for things that can fit in the drawers of a tiny red house?