The Oxford English Dictionary recently decreed that the pavlova, that airy confection of egg whites and sugar named after a Russian ballerina, was invented in New Zealand rather than Australia. This caused no end of celebration on this side of the Tasman, where we have insecurity complexes over just about everything. The Aussies have a better cricket team (yes, really), a better economy and soon they will even have more New Zealanders living there than there are at home, so it was quite a boost for our feeble collective self-esteem.

In any case, I can’t feel too sorry for the Australians because they already have a national dessert to call their own. The humble lamington, which was reportedly invented as a way of using up stale cake (that’s Ocker ingenuity for you), is often claimed as a Kiwi creation, but given that today is Australia Day I’m willing to let it go. There are many variations – just visit Mr P for some incredible interpretations – but this is one situation where I’m strictly a traditionalist. 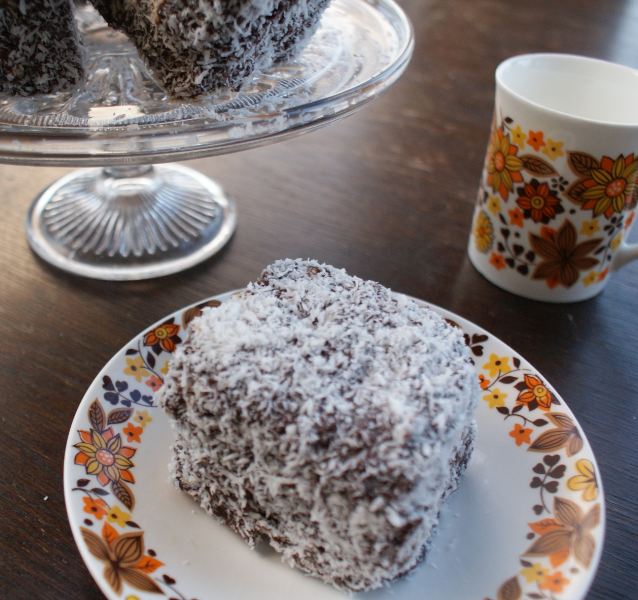 Australia Day Lamingtons
This is how my mother-in-law makes lamingtons, which are the best I’ve ever tasted. Admittedly, she’s not an Australian, but she must have learned this recipe from one. Antipodean supermarkets and bakeries sell square or rectangular slabs of sponge that are tailor-made for this purpose – the cardboard packets of trifle sponge sold in UK supermarkets isn’t quite the same, but it will do at a pinch.

Sift the icing sugar and cocoa into a bowl. Heat the butter and milk gently until melted, then mix with the dry ingredients. Let cool briefly.
Put the desiccated coconut into a shallow bowl. Dip each piece of sponge into the icing (pretend you are a plasterer), then dip into the coconut until it is evenly coated. Put on a serving plate and store in the fridge until you are ready to serve. They can also be frozen. If you’re being fancy, cut a slit in each lamington and fill with whipped cream and a dab of raspberry jam.