Apologies if you’re a bit over ham by now (or it offends your culinary or religious sensibilities). We didn’t have one this year, but the Boy Wonder’s mum cooked a fabulous one and I ate as much of it as I could. Now we’re home, there’s a ham-shaped hole in our fridge that no amount of chocolate or wine is able to fill. When the butcher reopens I’m going to go and buy some so we can have ham sandwiches (hamwiches?) and this fabulous warm salad. 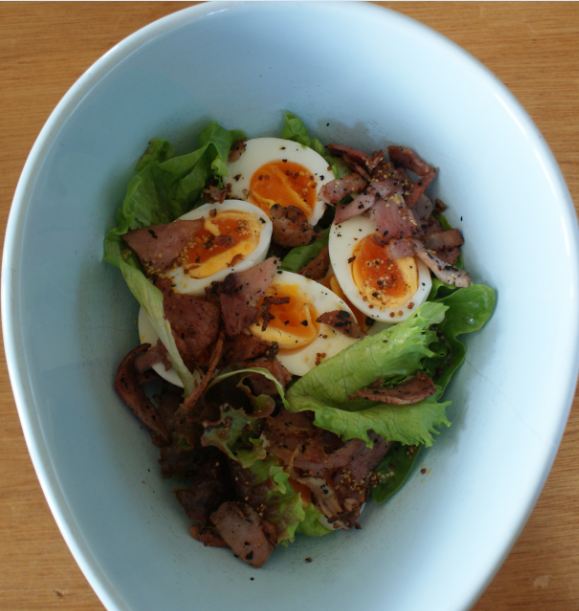 This is the BW’s invention – hence the amounts are somewhat vague- and we eat it a lot as a weekend lunch or light supper. It’s especially good at this time of year when there’s lots of ham lying around, but you can always substitute bacon if ham isn’t forthcoming.

First boil your eggs. The BW recommends a method he reckons he got from watching Nigella on telly. Put as many eggs as you like in a small pot, add hand-hot water and put on medium heat. Cook for nine minutes, then drain, peel and cut in half.
Meanwhile, fry a couple of handfuls of ham (or bacon) until crispy at the edges.
Fill a bowl with crisp, crunchy salad greens and vine tomatoes. Scatter the ham and eggs on top.
Make a punchy dressing by mixing extra virgin olive oil, red wine vinegar and wholegrain mustard (add a pinch of sugar if it’s too sharp). Drizzle over everything, toss and serve.