I like to think Nigella Lawson and I have a lot in common. We both love cooking and eating and feeding people, we both love buying cookbooks and bits of kitchen kit, we both have brown hair and beautiful daughters. We both have millionaire husbands and live in swanky Georgian houses in Belgravia… oh, hang on, that’s right, I knew there was something that didn’t quite match. For all our similarities, I doubt Nigella has the same sort of slightly sick feeling in the middle of January when she gets her credit card statement. She probably doesn’t look in her pantry and think, oh god, there’s nothing to eat and another week until pay day. But if she did, I like to think this is what she might come up with… 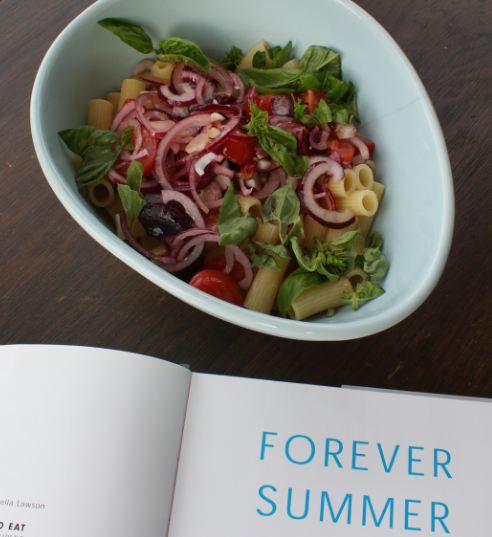 Pasta sorta alla Nigella
This is my entry for Forever Nigella, a new blogging challenge set by the wonderful Sarah of Maison Cupcake fame. The theme for this month’s challenge is ‘Seasonal Sensations’ – which I have interpreted as ‘making something sensational even when you are broke after Christmas’. I’ve taken inspiration from Nigella’s Ultimate Greek Salad (published in Forever Summer), which we have been eating almost constantly. But with no feta or olives left in the fridge, this is what I came up with to sustain us on a night when the cupboard was bare and the only thing we had in abundance was basil in the garden. Actually, the cupboard seems bare quite often at the moment, so we are eating like this a lot (which is no bad thing).

At least an hour before you want to eat (preferably two or more), put the olive oil, vinegar, onion and garlic in a small bowl. Stir well and cover.
Just before you want to eat, put the tomatoes, sugar and salt in another small bowl. Stir well and leave at room temperature.
When you want to eat, cook the pasta until al dente. Drain into a serving bowl, then tip the onion and tomato mixtures on top, followed by the basil. Grind over lots of black pepper. Toss well and congratulate yourself on another night of outwitting the bailiffs.