Have you ever noticed how things that you admire as rustic and charmingly old-fashioned in other cultures are often dismissed as deadly dull in your own? Take these biscuits, for example. They come from the Edmonds Cookbook, which was first published in 1908 as a marketing tool for Edmonds ‘Sure To Rise’ baking powder. Since then it has become the biggest selling book ever published in New Zealand and most households have a copy – the lucky ones still have their grandmother’s annotated copy with its tissue-thin pages.
I have a modern edition, which I rarely use because many of its dishes (using horrors like packet soup and sausage meat) seem rather old-fashioned and out of touch with the sort of food I cook. But its baking recipes cannot be faulted, especially if you’re after a nostalgia hit. 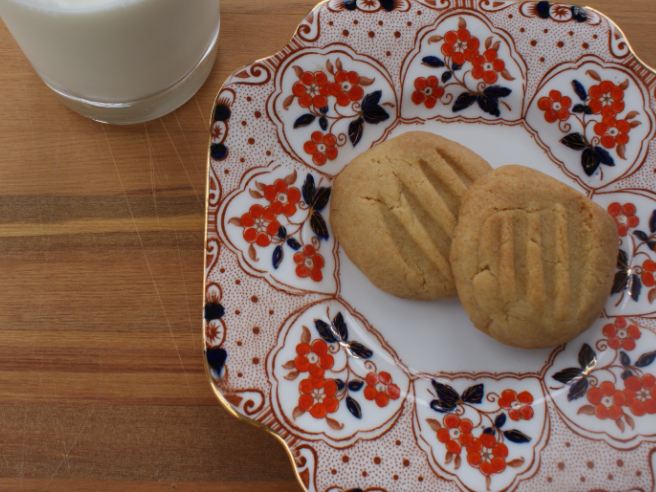 Hokey Pokey Biscuits (from the Edmonds Classics Cookbook)
These hokey pokey biscuits have humble ingredients and would never win a beauty pageant. But they have a deliciously buttery, caramel flavour and their very simplicity seems to make them extremely modern.
They would also be good as an accompaniment to hokey pokey ice cream…

Preheat the oven to 180C. Combine butter, sugar, golden syrup and milk in a saucepan over low heat. Stir until the butter is melted and the mixture nearly boiling. Remove from heat and let cool to lukewarm (about five minutes). Sift the flour and baking soda together, then add to the cooled mixture and mix well. Roll tablespoons of the mixture into balls and place on lightly greased oven trays. Flatten with a floured fork and bake for about 15 minutes, until golden brown. Cool on a rack and store in an airtight tin. Makes about 18.

Do you have an end of the week baking treat or a classic favourite? Post it below to share the sweetness of Fridays…