I’m in two minds about this post. January’s We Should Cocoa challenge is to make something using something leftover from the orgiastic Christmas food fest. I was at a bit of a loss – we’ve eaten all the good stuff – then I spied the box of Weetbix I’d bought a few months ago in a bid to reintroduce them to the Small Girl. She wasn’t keen (and as I detest Weetbix too, I couldn’t find it in my heart to insist she ate them). I’ve been surreptiously crumbling them into muesli occasionally but the box has been sitting there, annoying me.

The internet, or at least those creepy lobotomised Mum forums, is full of recipes for Weetbix slices so I bit the bullet and chose one. I tweaked it a bit to suit our cupboards but it’s not my finest creation by any means, which is why I wasn’t sure about posting it here. I think my real problem is that it tastes like the sort of thing that the women’s mags perkily say that busy, frazzled housewives are supposed to make – and while it’s slowly dawning on me that I AM a busy, frazzled housewife, I’d rather comfort-eat bread and butter than this kind of thing. So while I have an existential crisis about my place in the world, see what you think of this… 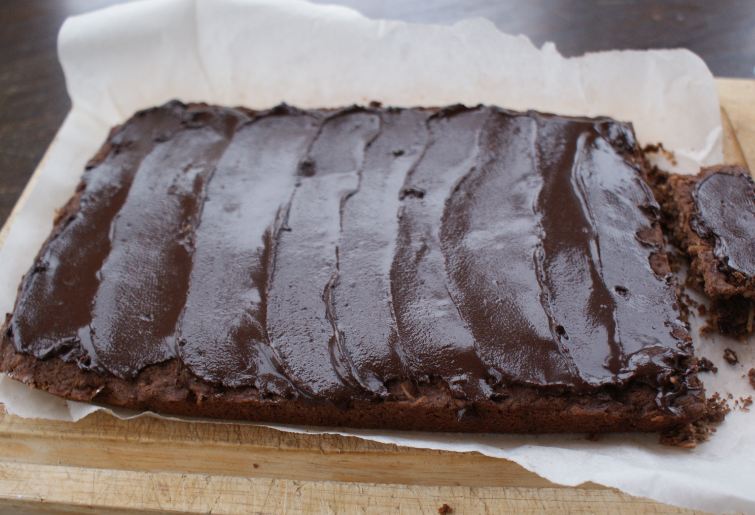 This is quick, easy and uses up a few dreaded Weetbix. If you can, make this with some raisins or dried fruit tossed in. It’ll be really boring otherwise.

1/2 cup raisins (or other dried fruit)

Preheat oven to 160c and line a slice tin with baking paper (leave an overhang so you can lift the whole thing out afterwards).

Melt the butter in a large pot, let cool briefly, then throw in all the other ingredients and mix well. Press firmly into the prepared tin and bake for about 20 minutes, or until a skewer comes out clean. Cool completely.

For the icing, sift the cocoa and icing sugar into a bowl, then add the vanilla and milk. Add a bit more milk if it’s not runny enough. Spread over the slice and cut when set. Drop it off at a coffee morning for exhausted mothers.