This will sound ridiculous, but I had a bit of an epiphany yesterday. I was thinking about bacon and egg pie (it’s back in vogue, apparently) and wondering if it was solely an Antipodean thing when it struck me that a bacon and egg pie is essentially quiche Lorraine. Well, sort of. I mean, bacon and egg pie might be lacking the cream, but it has the eggs, bacon and pastry. What more evidence do you need?

To test my theory, I dug deep into Elizabeth David and found her recipe for quiche Lorraine. Before I knew it, I had pastry resting on the bench and was measuring out cream like there was no tomorrow. If you ate like this all the time, I fear there wouldn’t be many tomorrows at all. But mon Dieu, as a Lorrainer might say, it’s worth it occasionally. 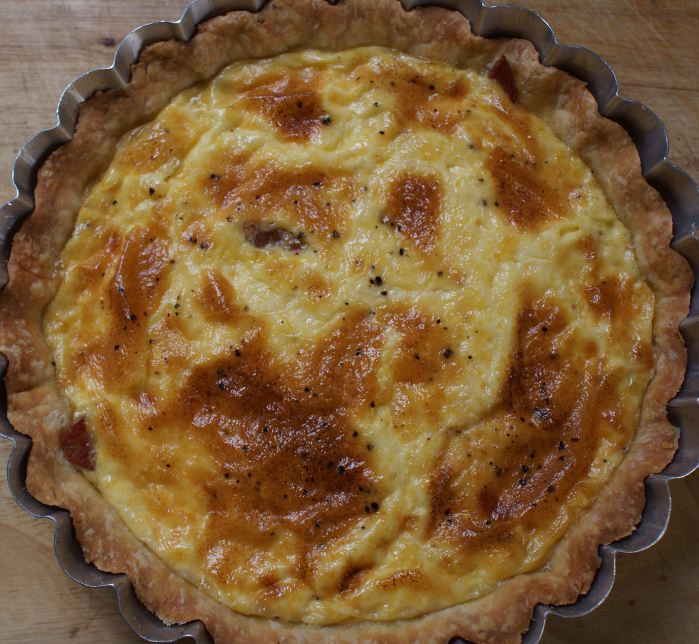 Elizabeth David’s Quiche Lorraine
This is so incredibly simple – and outrageously good. David says this serves four, but I think they would be four people with a very high tolerance for butter, cream and eggs. Vegans or people with high cholesterol, look away now!

Sift the flour and salt into a bowl, then rub the butter until it is crumbly. Add the egg and mix well with your hands. Add a drop or two of water if needed to make a soft dough that comes away clean from the bowl. Wrap in clingfilm and let rest for at least two hours. When you’re ready, roll it out thinly and line a 20cm flan tin. Prick the surface with a fork.

Preheat the oven to 200C. Cook the bacon in a frying pan for a minute or two, then cut into small pieces. Arrange these on the pastry. Mix the cream and eggs, then season with a tiny bit of salt and lots of freshly ground black pepper. Pour into the pastry-lined tin and put in the oven. Cook for 20 minutes, then turn the heat down to 180C and cook for another 10 minutes. The filling will puff up and turn golden brown. Let it rest for a minute or two when out of the oven, then serve. It’s good at room temperature too, but don’t eat it cold from the fridge.