Sunday was supposed to be the hottest day of the summer. Yeah, right. While parts of the country sweated it out in 40C-plus, we were stuck indoors while gale-force winds whistled around the house and rattled the windows. Now, with rain coursing down, I feel extremely cheated of the summer we were promised.

One good thing about all this rain though is that our vegetable patch is becoming incredibly lush and jungle-like. Sure, most of the cherry tomatoes probably won’t survive the rain, but the peppers and chillies are producing amazing crops and the basil has grown into a veritable forest. We’ve been picking the peppers while they’re still green – it’s not hot enough here for them to go red – and they’re so much nicer than the tough, bitter ones available in the shops. Having said that though, peppers of all colours are now really cheap so I’ve been buying red and orange ones, then tucking our precious green ones in between when I make this baked peppers dish. 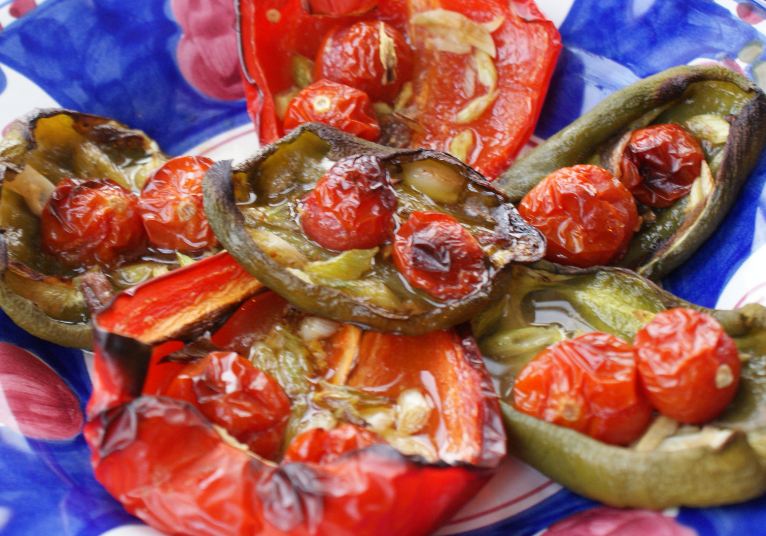 Newtownese Peppers (with apologies to Elizabeth David)
This can be adapted to suit the number of people you are feeding (and how greedy they are). If it’s the main vegetable component of a meal, I’d go for two peppers per person (especially if they are homegrown ones).

Preheat the oven to 180C. Cut the peppers in half and strip out the seeds. Lie them on a shallow-sided baking dish (they will shrink as they cook, so it’s fine for them to be quite snug). Put a few slices of garlic, a few cherry tomatoes and a few olives into each half. Drizzle over some olive oil, then grind over some salt and pepper. Bake for about 30 minutes. Eat them hot, room temperature or cold, depending on how hot (or cold) it is outside. Strew with torn-up basil leaves just before serving.