In theory, one of the good things about freelancing is that you can work from home, as and when it suits. Mix freelancing with working for someone else (oh, and having a small person to look after) and you quickly realise that working when it suits means working late at night when you’d much rather be in bed.

This week has been all about late nights, which has made me realise two things. Firstly, I’ve become much better at working when I’d rather be sleeping. Secondly, I’m not much good in the kitchen after hours. Last night, after finally finishing off an urgent (and incredibly boring) job, I decided to celebrate by making a birthday cake for a friend. Overtiredness made me overconfident, which meant that I didn’t worry too much when a slightly acrid smell started emanating from the oven. As the smell grew stronger I realised that most of the cake had escaped the tin and was now cooking burning on the oven floor. This is not a relaxing, sleep-inducing discovery to make after 11pm, especially when you have used the last egg and most of the butter. Please, don’t try this at home yourselves.

But do join in the fab new challenge from Dom at Belleau Kitchen, in which he asks participants to pick a recipe at random from their cookbook collections. Here’s what I chose… 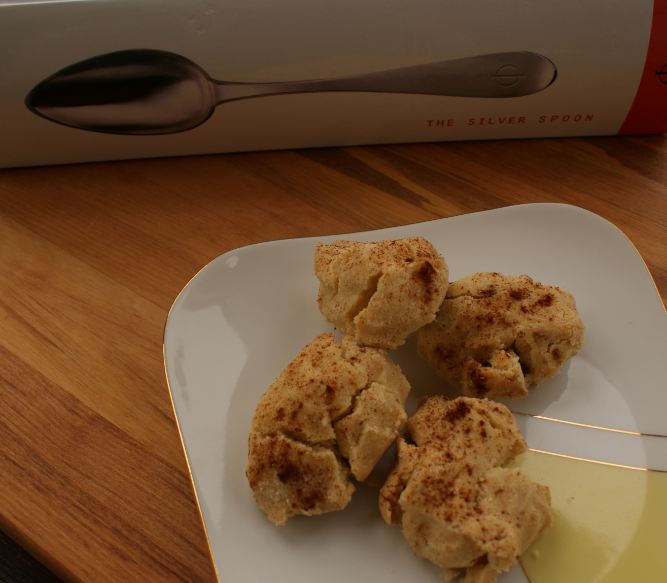 Italian Cinnamon Biscuits – Biscotti alla cannella
I have to confess I wasn’t too random about the choice of book – it’s our wedding anniversary on Sunday and the Boy Wonder gave me The Silver Spoon as a present some four years ago. I’ve never made anything from it, despite referring to it regularly. Now, I have no idea if these turned out how they were supposed to. I ended up adding an extra tablespoon of olive oil because I didn’t think the mixture was going to come together. They aren’t the prettiest biscuit, but the flavour is good. At this point in the week, that’s good enough for me!  But I’d love to know if this is what they’re supposed to be like. Can you help?

Preheat the oven to 200C. Grease a baking sheet with butter and dust with flour.
Sift the flour into a bowl and make a well in the centre. Pour in the oil, then add the sugar and lemon zest. Mix well, then leave to stand for 20 minutes. Shape into walnut sized balls, flatten slightly and place on the prepared tray. Dust with cinnamon, then bake for about 20 minutes. Leave to cool slightly on the tray for a few minutes, then cool completely on a rack. Go to bed, exhausted.