The Boy Wonder and I rarely cook together these days unless we’ve got people over. Even then, we tend to separate out courses, so one of us can be sorting out one part of the dinner while the other puts the Small Girl to bed/sweeps the toys off the floor/pours the drinks. We always eat together – and increasingly with the Small Girl, who has learned to clink glasses and say ‘cheers’ as a result – but cooking together isn’t always practical. However I got all inspired when I read last month’s post by Louise at Please Do Not Feed The Animals, who enlisted the help of her husband when it came to Belleau Kitchen’s first Random Recipe Challenge. Louise’s ‘Perfect Date Night’ post was so lovely that I felt we should follow in their footsteps.

The rules for Random Recipe Challenge #2 are to choose the 18th book on your cookbook shelves, then pick a recipe at random. Book 18 in our case turned out to be Plenty (aka the second Ottolenghi book), which was quite apt as the BW had given it to me for Christmas. The BW isn’t big on following instructions (or taking orders), so he baulked a bit when I said we had to cook whatever page fell open first. His face dropped even further when that turned out to be chard and saffron omelettes, so rather than open divorce proceedings we flicked the pages again and landed on Shakshuka. 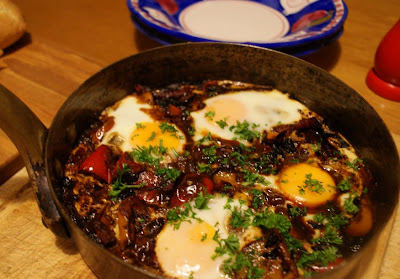 Shakshuka, from Plenty by Yotam Ottolenghi
This is a very simple dish, similar in style to piperade. It seemed to take us ages (we went out to the garden to pick the peppers and herbs, then we decided to have a glass of wine, then the phone went…) but we had a really nice time doing it. Our coriander plant has long since bolted so I used flatleaf parsley instead, and we didn’t have any saffron or bay leaves. Quantities below are for four – we halved it – and ate it with chunks of bread.

In a very large pan dry-roast the cumin seeds on high heat for two minutes. Add the oil and saute the onions for five minutes, then add the peppers, sugar and herbs and cook for another 5-10 minutes until well coloured.
Add the tomatoes, saffron, cayenne and some salt and pepper. Reduce heat to low and cook for 15 minutes. Add water during this time to get the consistency of pasta sauce. Taste and adjust the seasoning – “it should be potent and flavoursome”. This sauce can be done well in advance.
Make indentations in the sauce mix (either in this pan or in four small frying pans) and carefully break an egg into each one. Sprinkle with salt and cover, then cook on a very gentle heat for 10 minutes, or until the eggs are just set. Sprinkle with coriander and serve.