Last night I ran home from work into the jaws of a bitter southerly wind. My glasses got so wet I eventually took them off and relied on my feeble eyesight instead of peering through rain-soaked lenses. It was grim.

But when I reached the front door it was like the sun had suddenly come out. I could hear the Small Girl ‘reading’ Each Peach Pear Plum above the comforting hum of our turbo-charged convection oven. The Boy Wonder had gotten home early and worked his magic on a chicken – all I had to do was have a shower (while simultaneously stopping the Small Girl from stuffing my running kit down the toilet) and dinner would mysteriously appear. This must be what it was like having an old-fashioned wife. Winter won’t be so bad if this happens every night… 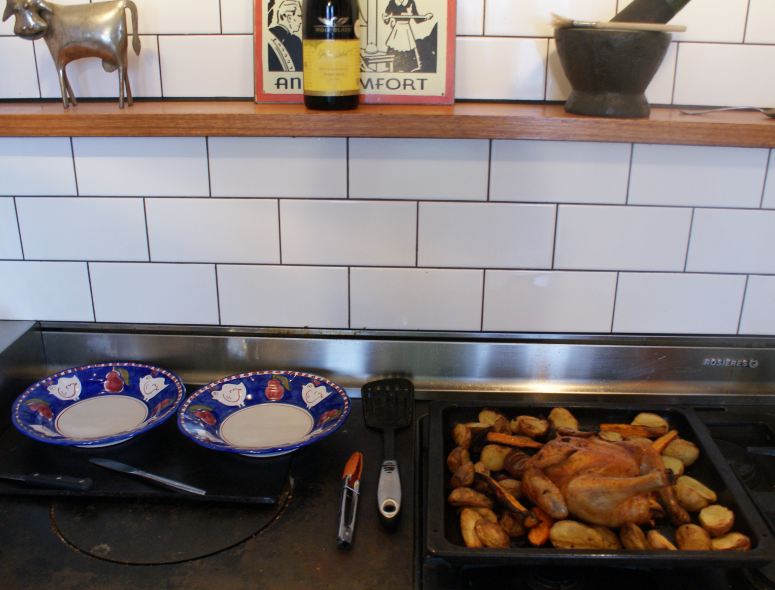 The Boy Wonder does all the bird roasting in our house. He learned about spatchcocking from Nigella and instantly took to it, probably because it meant the chicken cooks much faster. We eat free-range cornfed chickens, but not very often, so this is a real treat. This is more or less how he does it.

First, turn on your oven to about 200C. Next, spatchcock your chicken. In other words, cut out the backbone (“from bottom to neck” is how the BW puts it). Do this with a sharp knife or a pair of poultry shears. Throw the backbone away (or use it for stock). Put the chicken in a roasting dish and push down to flatten it out a bit.

Cut a lemon in half. Tuck one half under the chicken, squeeze the other half over the top. Slosh over a bit of soy sauce and a bit of olive oil. Be generous.

Next, cut a whole bunch of potatoes in half and throw them in the pan with the chicken. Do the same with a few carrots and a few onions (peel these first). Add unpeeled garlic cloves, fresh herbs, other vegetables as you have them. (“It was too wet to get any thyme or rosemary and I just thought, bugger it, I’m not going out there again,” said the cook.)

Grind salt and pepper over everything. Put the whole tray in the oven and cook for about an hour, or until juices run clear (this may take 10 mins longer, depending on your oven). Give it a shake occasionally to ensure  vegetables are soaking up all that lovely chicken fat and getting nice and crisp. Get wife to check chicken is cooked. Get Small Girl to wash her hands. Pour self a beer. Realise there are no green vegetables. “It’s ok,” says your wife. “There’s lots of vitamin C in potatoes.”