Did you know the white stuff doesn’t count if you are giving chocolate up for Lent? It’s true. I read it on the internet. Anyway, I needed to make something for the March We Should Cocoa challenge and I wasn’t going to be so irresponsible as to make something and not taste it. That would be an even greater sin!

In the spirit of killing two birds and all that, today’s post is also announcing that The Kitchenmaid has gotten out of the scullery long enough to get on Twitter. I don’t think I’ve nailed recipes in 140 characters or less yet, but it’s going to be fun to try. 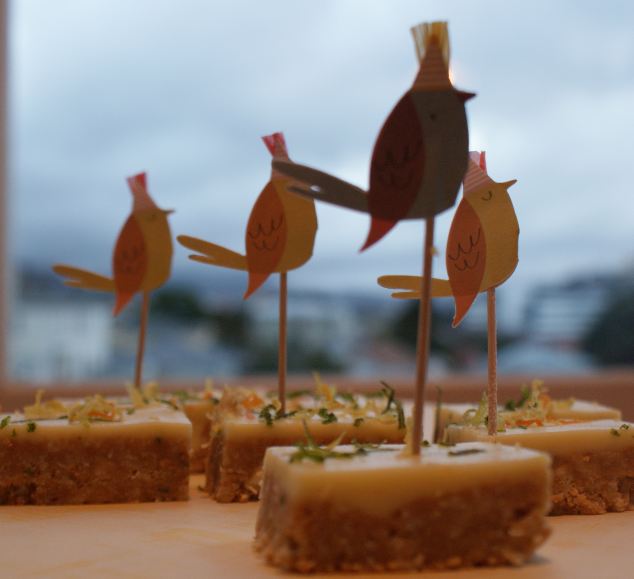 Lime Twitter Bars
Even if you don’t like white chocolate – and I’m not usually a big fan – this is heavenly. It keeps well in the fridge (if you have good willpower).

Melt the butter and condensed milk together over low heat in a large pot and set aside to cool.
Meanwhile, reduce the biscuits to crumbs, either in a food processor or put them in a strong plastic bag and bash them with a rolling pin, pestle or wine bottle. This is good for relieving tension, but make sure the plastic bag is up to the task or you’ll find yourself retrieving biscuit crumbs from all over the kitchen, which is quite stressful.
Tip the crumbs, white chocolate bits, coconut and grated zest into the butter mixture and stir until well combined. Press this into a lined slice tin (27x18cm) and set aside.
For the icing, melt the white chocolate and butter together VERY gently. Sift in the icing sugar and lime juice and beat to form a smooth, shiny paste. Spread this over the crumb base and sprinkle on a little extra zest if you feel like it. Refrigerate until set (about 30 minutes), then cut into bars. Store it in the fridge. Don’t forget to tweet me what you think of it!