The wedding is getting ever closer and so is our party. At this point I’d happily settle for sitting in front of the TV or laptop on my own with a cucumber sandwich, but I don’t think I’m going to get away with it. Even my boss came up to me yesterday and asked for costume advice for a royal wedding party outfit (she’s red-haired, English – the choice was obvious).
More importantly, I had an epiphany over the weekend about my Forever Nigella #4 entry – and so now I’ve revised my party plan accordingly. Next Friday night I’d like to be sitting in front of the TV with a cucumber sandwich and one of these little beauties. 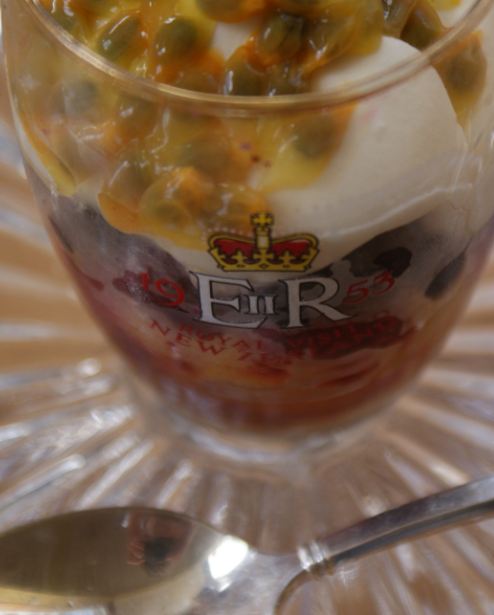 Royal Wedding Trifles
Exhaustive research has revealed that there’s at least one trifle recipe in all Nigella’s books and this recipe owes a little to all of them. I’ve aimed for a vague red, white and blue theme – berries, sponge, cream and Greek yoghurt – with a splash of Pimms for that English summer feeling and a dollop of passionfruit to represent the colonies. I made these in my precious ER glasses (which date back to the Queen’s 1953 tour of New Zealand) for the photograph but for the party itself I’ll be using something a little more robust. If you are feeding lots of people at your street party (or, indeed any party) you could always use plastic glasses. Quantities are approximate – so just add or subtract as you see fit.

For four people
1 cup fresh or frozen blueberries and raspberries
A slab of sponge (or trifle sponges, if you are in the UK)
About 1/2 cup Pimms
Juice of 2 oranges (to equal 1/2 a cup)
About 1 cup softly whipped cream
About 1 cup Greek yoghurt
2 passionfruit

Cut the sponge into cubes and divide the fruit between the four glasses. Mix the Pimms and orange juice together and sprinkle over the top – you might not need all of it, in which case it can be a cook’s treat. Divide the fruit between the four glasses. Fold the whipped cream and yoghurt together and dollop gently on top of the fruit. Cover and let sit in the fridge for at least two hours before serving (up to 12 hours is probably ok). Just before serving, scoop out the passionfruit flesh and divide between the glasses. Serve with tiny spoons and glasses of bubbles. To the bride and groom!