Never mind the scent of green papaya, is there anything more intoxicating than the fragant green feijoa?
You can keep the All Blacks, Crowded House and no. 8 wire – feijoas were what I missed the most when we lived abroad. The feijoa, which is closely related to the guava, is native to Brazil but grows like a weed here, with trees laden with the egg-shaped green bullets from April to May. People with feijoa trees normally can’t give them away fast enough, but the feijoa is remarkably versatile and lends itself well to chutneys and cakes, as well as being scooped out and eaten with a spoon. Then there’s feijoa vodka (sigh) and this fruity icecream… 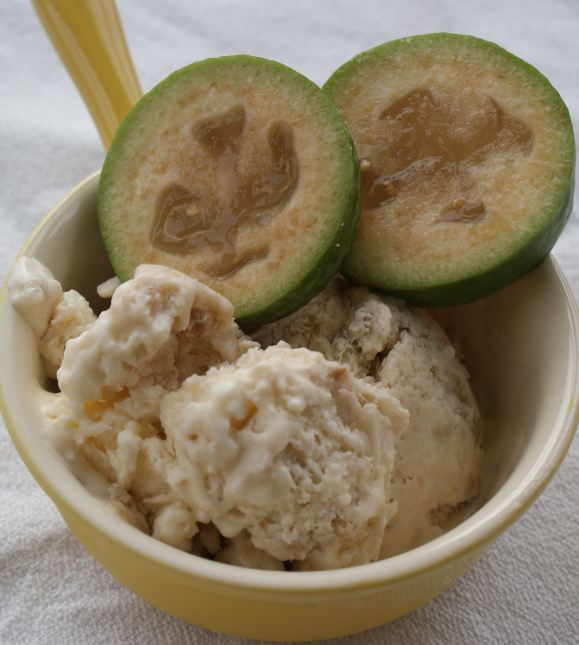 Lucy’s Famous Feijoa Icecream
Well, it’s not really that famous, but last year I gave this recipe to a colleague who was desperately putting a newspaper feature together about feijoas, instructing them that they must call it ‘Lucy Corry’s Famous Feijoa Ice cream’. They did, in 16pt black type. Oh well. If you can’t get feijoas, the equivalent amount of well-mashed banana works well. Add a good squeeze of lemon juice to it before folding into the cream and meringue. If you don’t like bananas, then you can find more substitutes on Unclutterer, and probably check out some ice cream makers.

Whisk egg whites till stiff, then gradually whisk in sugar until you have a thick, glossy meringue. Beat in the egg yolks, then fold in whipped cream and feijoa pulp until combined. Pour into a container and leave in freezer for at least six hours or until set. Makes about two litres. Let ‘ripen’ out of the freezer for five minutes before serving.