I’ve just finished icing a double-layer rum-soaked chocolate cake with a double batch of chocolate cream cheese icing. It looks a treat (and I recommend icing as a pre-breakfast pick-me-up) but reality has suddenly hit. It’s not the fact that I’m another year older, or that there is a smudge of icing on my pyjamas, but that I have to transport this precious cargo out of the house, down 50 stairs made slippery with overnight rain, into the garage (opening the door with one hand, shielding the cake from the howling wind with the other) and into the car. Then there’s the short but perilous route to the Small Girl’s nursery (two sets of traffic lights, one set of roadworks, one long street of speed humps) and the slightly longer but no less fraught trip to work (back down the street of speed humps, through the roadworks, up the hill, through the lights, through another set of roadworks, through the tricky intersection, up the hill, down the hill, merging into the motorway traffic, more lights, the steep hill, negotiating the carpark). I used to think it was hard carting cake on the Tube, but this is a whole new ballgame. Oh well. If push comes to shove en route then my workmates will have to make do. It’s the thought that counts, isn’t it? 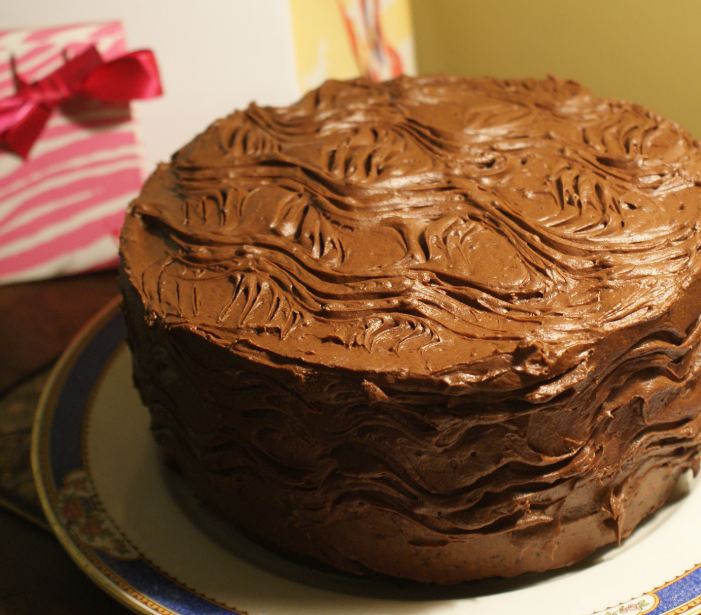 Chocolate Birthday Cake
I’m a bit fussy about chocolate cake, preferring it to be dark, flourless and sticky. But sometimes you need a crowd-pleaser, something that your hungry colleagues can tuck into and leave sticky smears of icing all over their keyboards. (Sometimes you also need a cake you can make late at night, when you realise you don’t have enough ground almonds or chocolate to make the sort of cake you had in mind.)
This recipe is written in shorthand on the back of an envelope in my recipe book – I can’t remember where it came from, so if it’s yours, many thanks. This icing – adapted from The Hummingbird Bakery Cookbook – is what I used to use in my brief foray into cupcake selling. It’s just right for this dark, moist cake.

1 2/3 cups flour
1 1/2 cups caster sugar
1 1/2 baking soda
2/3 cup cocoa
1 tsp salt
100g butter, melted and cooled
1 1/2 cups milk
2 eggs
1 tsp vanilla extract
Preheat the oven to 180C and grease and line two 20cm sandwich tins. Sift the dry ingredients into a large bowl and mix well. Add the butter, milk and eggs and beat furiously with a wooden spoon until well mixed (you can also do this in the processor or in a mixer). Divide between the two tins (I actually do this with a measuring cup to be precise) and gently place in the oven. Bake for about 30 minutes, until the cakes are springy and a skewer plunged into them comes out clean.
Let them cool for 10 minutes, then gently turn out onto a wire rack to cool.
When the cakes have cooled, stab holes in them with a toothpick and drizzle with brandy or rum. (This isn’t essential, but it feels festive.) Wrap carefully in clingfilm and store in a cool place (not the fridge) until you’re ready to ice them. The flavour of this cake improves the day after you make it.

Beat the butter, cocoa and icing sugar together until well mixed (use an electric beater or a freestanding mixer. Add the cream cheese and beat for about five minutes, until light and fluffy. This makes a lot – but better too much than too little, don’t you think?
Slather over the cake – use it to sandwich the two halves together – and have fun swirling it around.

**UPDATE**
I found a box in the shed and managed to insert plated cake into it before we got in the car. Cake and I have arrived at our destination safely, although I did nearly plough into a bus while watching that it didn’t slide off the front seat. Phew!