It was easy choosing the book for this month’s Random Recipe challenge – all we had to do was pick our favourite title. Finding something in it that I hadn’t made before was slightly harder.
I first read Nigella Lawson’s How To Eat when visiting my sister in the UK in 1999. I was having a mid-twenties crisis and the flu – a bad combination – and my recovery involved a lot of lying on her sofa and reading. Looking back, perhaps Nigella had some impact on what happened next: I went to Italy, came home, applied for journalism school and got my own copy of the book, which has gone everywhere with me ever since (I bought another copy when we moved to London a few years later). 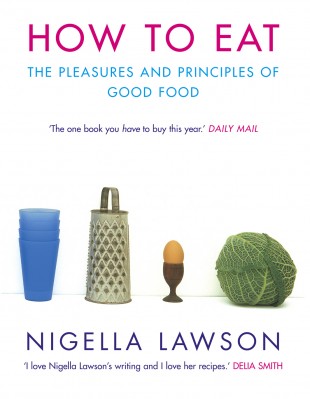 How To Eat predates the BBC commodification of Nigella into a finger-lickin’, satin dressing gown-wearing caricature. There are few pictures and none of her except a very Sophia Loren-esque author photo. But the writing is wonderful and the recipes are incredibly useful, whether you’re cooking for one or planning a long Sunday lunch. I never thought I’d have a use for the section on ‘feeding babies and small children’, but it was the only book-based information of its kind that I wasn’t disgusted by, even if I’ve yet to feed the Small Girl duck liver sauce. Yet.
When it was published the Daily Telegraph reviewer called How To Eat “the most valuable culinary guide published this decade”. Some 13 years later, I think that still holds true. 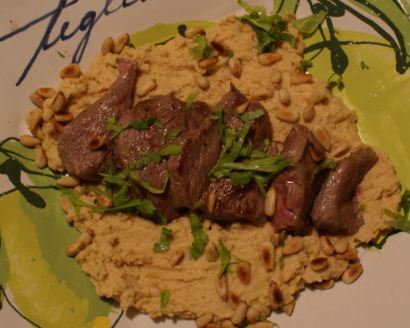 Hummus with seared lamb and toasted pine nuts
My copy of How To Eat falls open naturally at many well-thumbed pages so it took some turning to find something we hadn’t eaten before. Now I’ve discovered this I think we’ll be having it a lot.
In the book, Nigella devotes a lot of words to discussing the making of hummus – the soaking and cooking of chickpeas etc. Ignore this bit if you think making your own hummus is akin to kitchen slavery, but it really does taste better. AND, cooking your own chickpeas means you can use their cooking liquid to slacken the hummus instead of adding more oil. Don’t be tempted to use the brine from the tin – do as N suggests and dollop in a bit of Greek yoghurt instead.
For the lamb, she suggests using lamb noisettes, cut into little rags and tatters, but I used lamb rumps, sliced into 2cm steaks and quickly fried (it was such nice meat, I didn’t want to tear it up).
You can find her updated version of the recipe here – essentially it’s just a case of, a) make hummus, b) toast pinenuts, c) sear lamb, d) dollop hummus on plate, add lamb, sprinkle with pinenuts and chopped parsley. Over-achiever that I am, I also made some flatbreads to go with it, but you could just as easily use bought ones. It’s just that I like a sprinkle of smugness with my dinner, don’t you?