I’ve been perusing a lot of menus lately – I want to emphasise that this has been at my desk rather than at a damask-covered table – and chuckling to myself at the ridiculous labels some restaurants come up with for their dishes. There seem to be two major trends. One is to over-egg the pudding as much as possible, with lots of flowery language (and mention of froths and foams on the plate), while the other is to be as stark as possible. There’s almost as much artifice in the latter as the former, but it’s certainly more appetising. 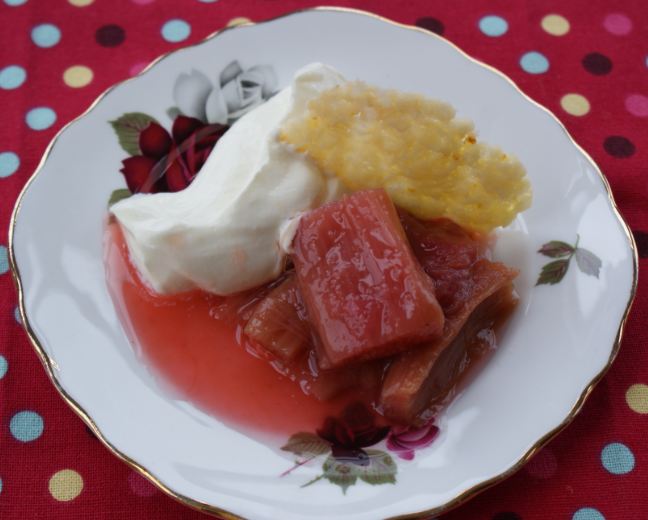 Oven-poached Rhubarb
You could cook this on the stove if you wanted to, but sticking it in the oven is much less fuss.

Preheat the oven to 170C. Put the rhubarb into a large, ovenproof dish and sprinkle over the sugar. Pare the rind from the orange using a potato peeler. Tuck this into the rhubarb, then cut the orange in half and squeeze over the juice. Then cut the orange into chunks and add to the dish. Cover tightly with foil and bake in the oven for about 30-40 minutes, until the rhubarb is tender. Let cool, discard the orange pieces and peel, then cover and put in the fridge until ready to use.
For a ‘deconstructed’ fool, put the rhubarb and a bowl of whipped cream or Greek yoghurt on the table and invite your guests to help themselves.
(If you don’t think your fellow diners are up to a bit of DIY, fold the rhubarb through about 500g Greek yoghurt until marbled. Dollop into glass bowls and take to the table with your most special silver spoons. Either way, thin, crisp shortbread is a great accompaniment.