One of the joyous things about working in magazines or newspaper features is something called Forward Planning. You see, we don’t just have clever ideas on the spot and turn them out the next day (that’s what online journalism is for), we have to think about them in advance. In the UK, this meant people started ringing me up about Christmas story ideas in July. I quite liked going to champagne and mince pie tastings in the middle of summer in London because it felt like home, but it also means you are seriously over Christmas by the time you’ve written or commissioned 20,000 variations on how to stuff a sodding turkey and not get fat.
Things seem a little more relaxed in the southern hemisphere, but I have felt a bit like my old self in recent weeks thanks to an obsession with when the asparagus season is starting so I could organise my asparagus issue. Acting on a Twitter tip-off, I finally found some in two different locations last week so I could rush out and grab some to photograph. See, there is an element of public service journalism in what I do… 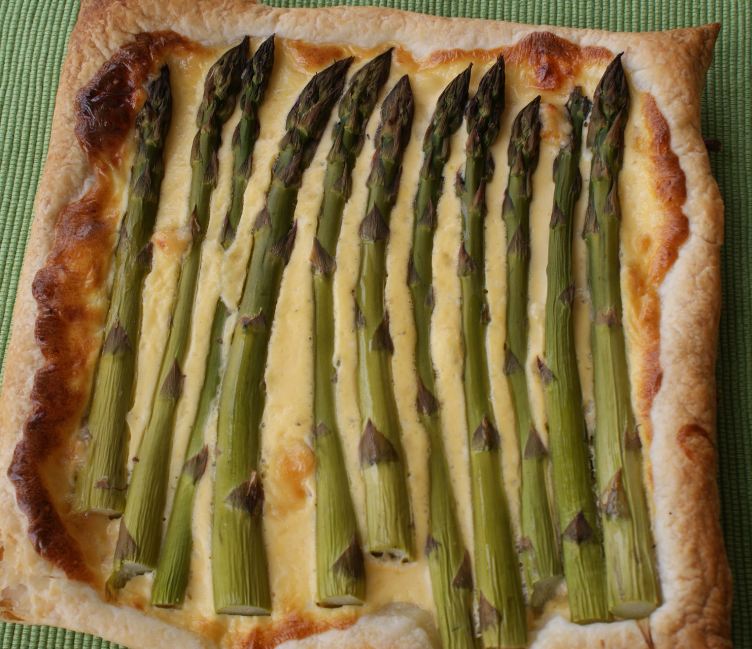 Asparagus Tart
My favourite thing to do with asparagus is to cook it really quickly in boiling water and dip the stems into melted butter, salt and pepper, but I needed to photograph this tart for work. It’s really good – and very, very easy.

1 sheet frozen puff pastry
1 egg
125g sour cream
about 40g Parmesan, grated (a couple of handfuls)
about 16 spears of asparagus, washed and the tough ends snapped off
salt and pepper

Preheat the oven to 200C. Lie the pastry on a baking sheet and score a line about half an inch from the outside (like you’re drawing a frame inside the pastry edge). Mix the egg, sour cream, cheese and salt and pepper together in a small bowl, then spread this on the pastry, inside the ‘frame’. Lie the asparagus on top. Bake for about 15-20 minutes, until the pastry is risen and golden. Makes a nice light lunch for four with salad and bread.

There seemed to be a lot of interest last week in the Small Girl’s cooking abilities. Here’s a shot of her in her favourite role, chief taster.

What’s your favourite thing to do with asparagus?