It’s whitebait season again, but we’ve yet to hear any reports from the Coast as to how its going. This isn’t unusual – whitebaiters are notoriously secretive, especially those who sell their catch without the knowledge of Mr IRD. Last year the Boy Wonder experimented with frying the tiny fish in a pan, Spanish-style, rather than binding them in traditional egg fritters. It was a great success, if labour-intensive. But last week he stumbled on an even better way – a sort of oven-fried version, made with a recent newspaper-wrapped delivery from Westport. The other thing that’s changed from last year is that a pound of whitebait (they only come in Imperial measures) used to be enough for two of us – now we have to share it with our smallest dining companion. That’s not a bad thing. 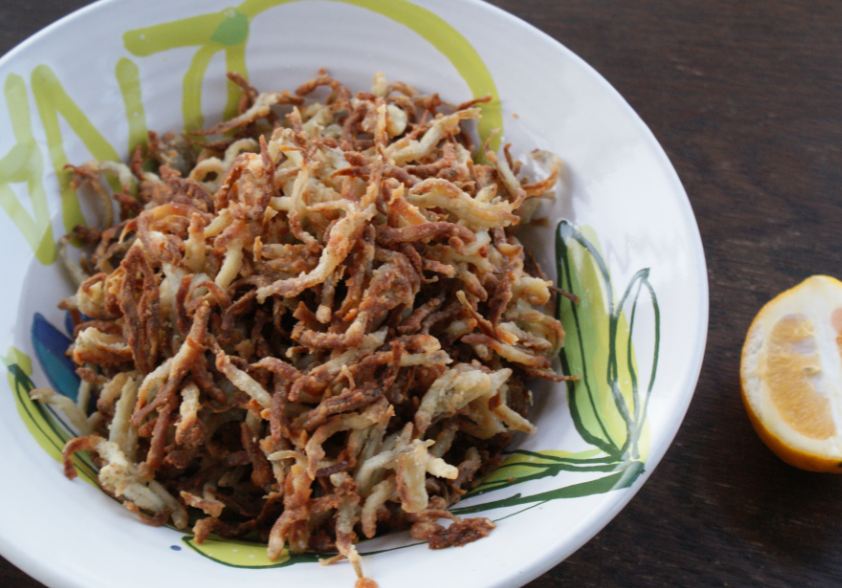 Oven-fried whitebait
Excuse the Coaster-style description, but there’s no point giving this a fancier name (except ‘bloody good oven-fried whitebait’ perhaps). All you need with this is a crunchy green salad and a bit of baguette. Oh, and lots of lemon halves.

Defrost the whitebait and rinse under the tap to get rid of any grit. Drain well.
Preheat the oven to 200C and pour about 1/2 cup of olive oil in a roasting dish. (You may need more – the BW is a bit vague on exact measurements). Heat the oil in the oven for about five minutes. While it’s heating up, dredge the whitebait at a time in seasoned flour (shake off the excess in a coarse sieve.) Carefully tip into the hot oil and return the roasting dish to the oven. Cook for about 20 minutes, until the little fish are golden brown and crunchy. Serves two greedy adults and one voracious toddler for dinner – so at least four adults for lunch.

Do you have a favourite way to cook – or eat – whitebait?