One of my favourite things to do on a weekend morning is to get up early and go for a run. Mad, I know, but there’s a difference between getting up early because you want to and getting up because a small child is demanding that you do. Often, if I end up running through town, I see people still staggering around from the night before. Last Sunday I ran past a house where one woman, in a spangly dress and runaway mascara, sat on her front step with her dressing gown-clad flatmates, giving them a rundown on her antics the night before. I felt very old and boring by comparison. But I also had the smug satisfaction that I was running home to put a slice of this fruity bread – which I’d made the night before, because I am THAT rock ‘n roll – in the toaster. Take that, young ‘uns! 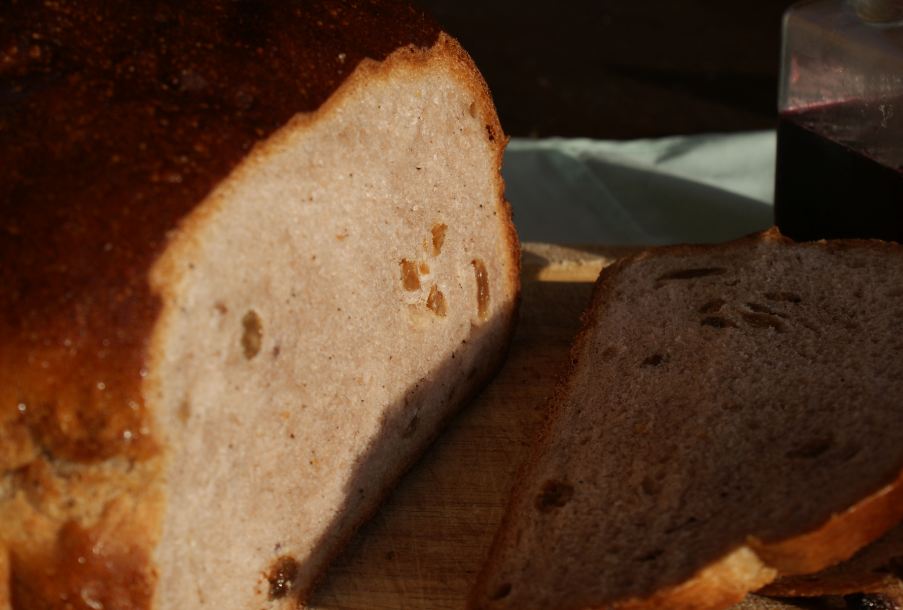 Spicy Fruit Loaf
Don’t pull one of those ‘but I can’t possibly make bread’ faces, this is really easy. Make it on a Friday or Saturday night (before you go out, if you have a more exciting life than I do) and you’ll be rewarded with lovely toast in the morning.

Put the boiling water and milk into a large bowl – with any luck it will be the perfect, lukewarm temperature. Add the yeast and honey or jam, stir and leave to sit for a minute or two. Add the egg and stir again. Add the raisins, zest, flour, salt and allspice and knead to form a smooth, satiny dough that springs back when you punch it. You can do this in a freestanding mixer with a dough hook, or with your hands, as your kitchen dictates. Return to the bowl, cover with plastic and let rise in a warm place until doubled (about 1-1 1/2 hours). Turn out, punch down and knead gently, then form into a tight ball and put into a greased 23cm cake tin (or form into a sausage and put in a large loaf tin). Cover with plastic again and let rise for another 30 minutes. During this time, turn the oven to 220C.
When the oven is hot and the dough has had its second rise, carefully put it in the oven. Turn the temperature down to 190C after 15 minutes and let the loaf cook for another 10 minutes, until well-risen and hollow-sounding when you tap its bottom.
Just before you take the loaf out of the oven, put the orange juice and brown sugar into a small pot and bring to a simmer over medium heat until syrupy (about three minutes). Brush this over the hot loaf when it is cooked. Let cool on a rack while you put your pyjamas/party dress on.

Have a sweet, sweet Friday everyone, thanks for coming to visit this week.