My niece says you should never pass up a social engagement because you never know what you might get out of it. Last year, bearing this in mind, my sister and I reluctantly allowed the Boy Wonder to drag us to a party. Let me be clear: this was a party with a small ‘p’. There was a rugby game on the TV, around which most of the action was gathered, and a strong gender split in the manner of ‘ladies, a plate’. The men of the group gathered around the television, shouting encouragement, while the women sat at a table and talked about people they knew and how much their husbands earned.
I didn’t know any of them, except the hostess, and my sister, who had arrived the day before from Taiwan, was immediately persona non grata to this coven. They were suspicious because she revealed she had spent a few years living in this particular town, and I could see their brains working furiously to work out her age and how it was she was “from Taiwan” yet didn’t look Chinese. My sister, who is charm itself, bravely smiled through the whole ordeal, including being chatted up by the host (at which point the hostess couldn’t get us out the door fast enough).
Anyway, the highlight for me, apart from laughing our heads off all the way home, was the plate of chewy, sticky date balls that someone had brought as their ‘plate’ for the evening. It’s taken me a while to track down the recipe, but it proves my niece was right (even though my sister will never go to a party with me again). 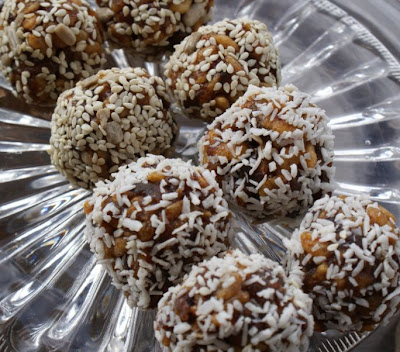 Walnut Surprises
I’ve searched high and low for this recipe, finally finding something like it in an ancient Annabel Langbein. The original is very, very sweet – including the nuts makes it a little more sophisticated. If you don’t like walnuts, try pieces of crystallised ginger instead.

Put the butter, sugar, dates, vanilla, salt and ginger in a large pot and bring to the boil. Let simmer for three minutes, stirring constantly. Remove from the heat and let cool for a minute or two, then add the rice bubbles and the beaten egg. Stir well. As soon as it’s cool enough to touch (wear gloves, if you’re very sensitive), take small amounts of the mixture and shape into balls around a walnut half. Roll in coconut, sesame seeds or chopped walnuts, then put in the fridge to set. Makes 24.

Are you a party person? What’s the worst one you’ve ever been to? Have a sweet, sweet weekend everyone, whether there is a party involved or not x