Most people have leftovers to cope with after Christmas; I have leftover blogging events. Well, they’re not leftovers as such, more that I couldn’t quite squeeze them in before December 25. But in the spirit of caring and sharing, let me present you with the We Should Cocoa/Fresh From The Oven mash-up: a Chocolate Orange Wreath. 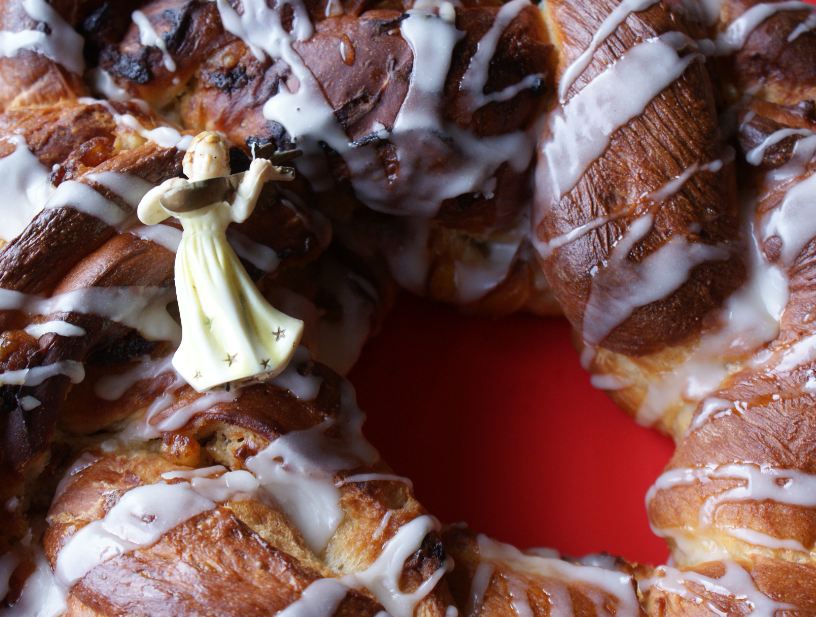 The We Should Cocoa guest ingredient for December is orange and I have cunningly worked it and chocolate into the festive wreath recipe set by Michelle of Utterly Scrummy for this month’s Fresh From The Oven challenge. You can omit the chocolate of course, but it does add a suitably OTT dimension. I made this the weekend before Christmas and it was just what we needed to keep us going. I had thought about making it again for Boxing Day breakfast but with litres of cream and sherry flowing through my veins from the day before I decided discretion was the better part of valour. You could, however, make it on December 31 and it will be perfect for a late New Year’s Day brunch (and any leftovers will be great toast the day after that).

Don’t be put off by the lengthy instructions, this is really quite simple to make. Anyway, it’s the holidays – what else would you be doing but playing in the kitchen? Use whatever fruit/nut/chocolate combo you like in the filling, but keep more or less to the amounts specified.

Pour the milk into a large bowl (or the bowl of a freestanding mixer with a dough hook) and sprinkle over the yeast. Leave in a warm place to start acting for five minutes, then add the other ingredients and mix well with a wooden spoon. Knead by hand for 10 minutes, or with the dough hook for three or four, until you have a soft, springy, satiny dough. Grease the bowl and return the dough to it. Cover with plastic and leave in a warm place until doubled (about an hour).

While the bread is proving, make the filling by beating together the softened butter, sugar, essence/extract and flour to make a paste and then fold in the fruit and nuts. Now is also a good time to line a baking tray with nonstick baking paper so you don’t have to rush later.

When the dough is ready, turn it out onto a well-floured surface and punch down. Knead for a minute or two, then roll it out into a large rectangle shape. Spread the filling over the dough and then roll it up, starting from the longest side.

Now comes the fun bit. Using a sharp knife slice the roll in half lengthwise. Put the dough onto the lined baking sheet. Twist the two halves lightly together, cut sides out, and form into a circle, pinching the ends together. Leave to prove again for about 45 minutes – 1 hour or until the dough has doubled in size and then brush with the lightly beaten egg and milk.

Bake at 200C for 20 – 30 minutes or until lightly browned and cooked through.

Transfer to a rack to cool. Drizzle with vanilla icing if the mood takes you and serve. If you’re making this a day in advance and would like to reheat it, skip the icing stage. Wrap it well in foil when cool and reheat in a moderate oven for 10-15 minutes. You can work your magic with the icing just before serving.