Last year I had a massive dose of guilty mum-itis after ignoring the reminder notices about fundraising for the Small Girl’s nursery. I couldn’t bear the thought of ringing up donors for the charity auction, so I recklessly dashed off an email to the organiser offering my baking services as an auction lot instead. 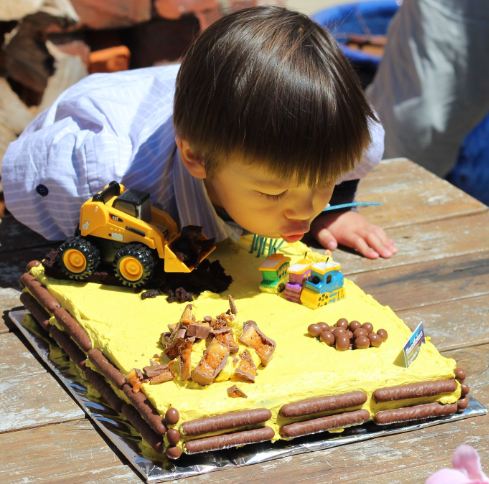 Unfortunately, we happened to be sitting next to the nice people who generously bid a lot of cash for the prospect of me making them something (egged on by the Boy Wonder and some cheap Italian wine). Then I promptly forgot about it, until I got an email in December, asking me to make their son’s third birthday cake in January. Suddenly, ringing up and begging for donations didn’t seem like such a bad idea. But then I remembered the third birthday party we went to last year, where clever Kate had made a quarry sort of cake, complete with Lego diggers, and everything seemed to fall into place.

Digger Cake
Rather than give you a step-by-step guide, here’s a rough outline of how to make your own digger cake extravaganza. Cake decorating is not my forte but this was surprisingly therapeutic.  The best bit was digging out holes in the quarry, because it felt like such a wicked thing to do. Perhaps I need to get out more.

2 x chocolate cakes – I made two cakes to this recipe and cooked them in 19 x 29 cm brownie tins.
1 x batch of Dan Lepard’s meringue buttercream icing – adding a splash of orange essence and tinting it ‘digger yellow’
1 x packet chocolate finger biscuits – for the retaining walls around the cake
1 x Crunchie bar, some chocolate peanuts, and sundry other bits of chocolate for rocks etc
Other sweets could also be good – peppermints for concrete blocks, liquorice straps, jelly baby bystanders…
1 x digger toy of your choice

Trim the top of the cakes so they are level – save the bits to use as decoration later. Put them on a cake board – or a large piece of cardboard covered in foil or wrapping paper. Slather on the icing – pretend you’re a plasterer, if you really want to get into the theme of it – and work your magic with the sweets and digger to create a suitable ambiance.

Have a sweet, sweet Friday everyone x