Buoyed by my success at sandwich making (did I tell you, my Black Forest Sandwich won the People’s Choice Award at the Urban Harvest sandwich contest?), I am now turning my hand to jam. While my sandwich making prowess has been honed over decades, my jam making skills are rudimentary to say the least. However, they welcome allcomers at the Welly Jamoff on March 25 and I figure you’ve got to be in it to win it – or something like that.

Actually, I’m just happy to be in it, especially because I reckon all the other ‘jampetitors’ will be crafting their preserves from carefully cultivated fruit and mine came from the supermarket. That said, I have been pretty selective. I haven’t just chosen any bananas for my entry, but bananas with a social conscience. All Good Bananas are all about “changing the world, one banana at a time” – their Fairtrade fruit comes from Ecuador and it might be my bleeding heart imagination but I’m sure they taste better. I’d rather pay a little bit more for bananas for my family if it means the family that grew them gets some kind of payback along the way.

Whether that means my jam will make the cut on Sunday remains to be seen – but in the meantime, here’s the recipe. It’s really good spread on homemade bagels, dolloped on Greek yoghurt, used to sandwich a sponge or even stirred into porridge. 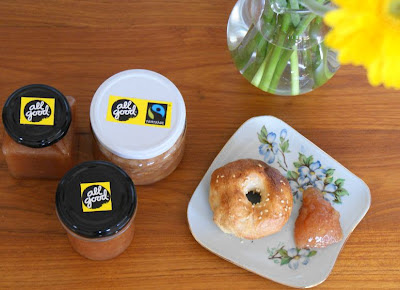 All Good Banana Jam
I’ve had this recipe since 2005, when I asked a web forum if anyone could tell me how to make banana jam without using artificial colours and flavourings. A helpful woman called Kerry sent me a version of this recipe, saying it was the one she used when she lived in Lagos, where the bananas have red skins. I’ve upped the cinnamon a bit and added walnuts, but you could leave them out.

6 ripe but not mushy Fairtrade bananas (choose ones with a gentle amount of freckling on the skin)
3 cups Fairtrade white sugar
3/4 cup lemon juice (about 4 lemons) – from our neighbours’ tree
1 1/2 tsp Fairtrade cinnamon
1/2 tsp salt
1 cup walnuts (fresh local ones, if you can manage it)

Mash the bananas with a fork, then arrange layers of mashed banana and sugar in a heavy-based pot. Sprinkle over the cinnamon and salt, then pour over the lemon juice. Cover and let sit for an hour, until the sugar has dissolved and the mixture looks syrupy.
Heat gently and bring to a boil. Simmer for 20-30 minutes until thick, stirring occasionally to prevent burning. Stir in the walnuts, then pour into sterilised jars and seal. Makes 4-5 jars. Store in the fridge once opened.

And if you’re wondering what to do with those banana skins (apart from putting them on the pavement for comedy potential) this cake puts them to use. I can’t quite stomach the thought of it myself, but let me know if you’ve tried it.

Anyway, are you a jamtastic type? What’s your favourite to make or eat?