I think I’ve told you before about what a terrible shopper I am but things have gotten especially bad lately. Don’t get me wrong, I like mooching about the shops, it’s just that I don’t get much time to do it these days and I’ve decided shopping is like running – you have to put in the miles if you want results.

I thought I was still ok at buying food – at least, I seem to spend a lot of money on it and there is always a lot to carry from the car up our long and winding path – but recent events have proved otherwise.

The other night, for example, I realised we had the grand sum of four potatoes to have with our dinner. For a normal family, this might be enough, but the Boy Wonder grew up in a house where the potato was king.

His meat-loving brother even went so far as to call it the steak of vegetables and I once witnessed my mother-in-law peeling no less than 50 giant spuds to feed six adults (with none left over). I think I know why there was a potato famine – the Boy Wonder’s forebears ate them all before they skipped town for New Zealand. 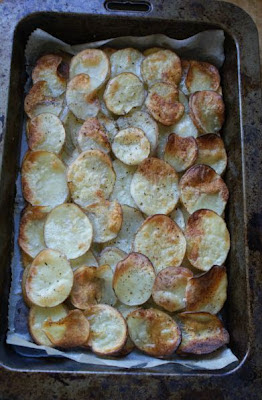 Anyway, should you find yourself in a similar situation, here’s how to make four potatoes look like a lot more. Please, don’t tell my in-laws.

Potato Gratin
You can still make this with lots of potatoes, but you’ll be slicing for a lot longer. Being a slack shopper does have some benefits.

Potatoes – as many as you have, of whatever variety you like, scrubbed
Butter

Preheat the oven to 190C. Grease an oven dish – I use a brownie tin that my dear husband wrecked by cooking sausages in it, but any kind of metal dish will do.
Slice the potatoes as thinly, evenly and prettily as you can. Layer them in the tin and generously dot with butter. You can slosh on olive oil if you are so slack that you don’t even have butter in the house, but please, don’t use marge.
Continue layering and dotting until you are out of potatoes. Save some nice ones for the top layer if you remember. Grind over lots of salt and pepper and bake for 30-50 minutes, depending on how many potatoes you have used, until crispy and brown on the top and soft underneath.

That’s my frugal tip for the week. What’s yours?