I’ve just read the most ridiculous line in a celebrity gossip story (I know, I know) where some starlet tells the interviewer that her friends all go on juice detoxes but she doesn’t need to because she mostly only eats egg whites, vegetables and herbal tea. Yeah, right. Pull the other one, it’s got prescription drugs on it. I mean, does ANYONE really eat like that? No wonder she always looks so pained in photographs – she’s starving.

That said, I have personally reached my hot cross bun and chocolate limit for a few days and fancy eating green things with a bit of crunch. And a bit of cheese. 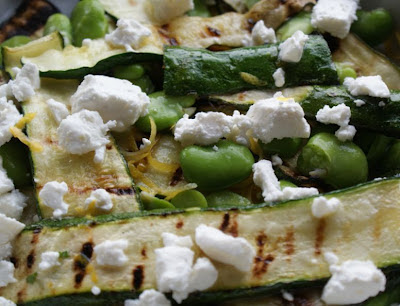 Griddled zucchini, feta, lemon and broad beans
I’m hoping the odd weather means the zucchini I’ve been buying at the market are just late bloomers and not out of a coolstore. The broad beans are out of the freezer and the lemons from our neighbours’ tree (we repay them in baking, honest). This is a really easy dish to throw together when you’re pottering around doing other things. If you don’t have a griddle pan, use a frying pan or roast them in the oven.

Brush the zucchini with olive oil and cook put on a ridged grill pan, turning as appropriate.
While they’re cooking, put the broad beans in a heatproof bowl and cover with boiling water. Let sit for a couple of minutes, then drain. Pop the beans out of their shells and put on a serving plate with the cooked zucchini/ Crumble the feta on top, then zest over the lemon before squeezing over its juice. Add a splash of olive oil (not too much, as the zucchini will be reasonably well-oiled). Season with salt and pepper, then toss gently before serving. This is good on its own as a very light meal or as a side salad. Egg whites and herbal tea optional. Serves two as a meal, more as a salad.