When we got back from the West Coast (another nail-biting ride, thank you, Air New Zealand) I opened the freezer and realised that we had nothing to eat. Well, that’s not strictly true. There was some ice cream, a packet of puff pastry, some pork Scotch fillet and about four half-baguettes. Nothing leapt out and said ‘here’s tonight’s dinner’, but the half-baguettes said ‘we could be all sorts of things if you just sat down and thought about it for a minute’.

I made a cup of tea and thought a list of ways in which to use up those stale baguette ends could be useful. I didn’t make it to 101, but I thought you might have some suggestions to add. 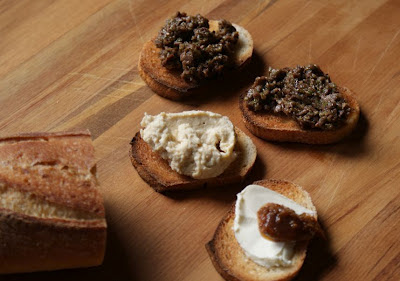 101* ways with a stale baguette
My clever sister makes wonderful baguettes but it’s a skill I have yet to master. Ours come from various bakeries around town. The bigger, fluffier ones tend to dry out a bit when frozen, but the denser, more sourdough-like sort are fine. Either way, they defrost super fast.

1. ‘Fried’ chicken: Pulverise half a baguette (the fluffy sort) in the processor. Mix with 1/2 tsp smoked paprika, a pinch of salt, lots of black pepper and a little chilli powder and tip into a bowl. Beat an egg white with a splash of water, then dip 500g boneless chicken thighs in the egg mixture before coating with the crumbs. Bake at 180C for 30 minutes, turning half-way through. Instant fried chicken, only better for you.

2. Crostini: Slice day-old baguette into 3-5mm pieces (don’t get your ruler out, but keep them thin). Toast in a 180C oven (or, simply wham them in the toaster). Top with tapenade, hummus, cream cheese and salsa etc. Excellent impromptu canapes for apertif hour – you have that at your place, don’t you? Note, this is for dense baguettes only – the fluffy ones are too holey.

3. Poor Man’s Souffle: Chop a baguette into little pieces and put into a large, greased ovenproof dish (like a lasagne dish).Add roasted peppers, caramelised onions, ham, wilted and drained spinach, feta – whatever you fancy (within reason). Beat 5 eggs with 1 1/2 cups milk (or 1 cup milk, 1/2 cup cream) and pour over the top. Sprinkle with grated cheese (and more crumbs, if you feel like it). Bake at 180C for 35 minutes, until set and golden on top.

5. Eggy bread: French toast isn’t proper French toast if it’s not made with French bread. Whisk 4 eggs with a cup of milk (or half milk, half cream), a pinch of salt, a spoonful of sugar. Heat a knob of butter in a heavy frying pan. Bathe slices of baguette in the eggy mix, then fry on both sides until golden. Serve with syrup of your choice and the best bacon.