Last week I walked past a cafe that had been one of the hottest tickets in town when I was a student.
I remembered how my boyfriend (cringe) and I would go there on a Sunday morning sometimes and eat focaccia with smoked salmon and apple while we read the paper, feeling very sophisticated and urban.

The cafe has long since changed hands and I think I’d cross the road if I saw the (ex)boyfriend coming towards me, but having just re-visited the salmon and apple combo, I can confirm it’s still good. 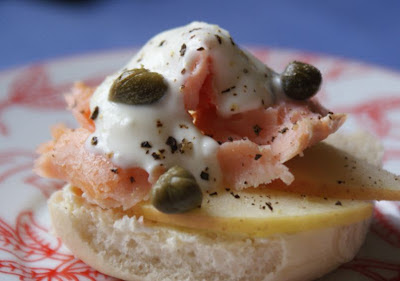 Hot smoked salmon and apple sliders
Forget the focaccia, darling and chuck out the ciabatta, these days it’s all about sliders. In case the rebranding revolution hasn’t reached you yet, sliders are baby burger buns and they are the bread on everyone’s lips.
Al Brown is responsible for their rise to prominence here and it’s funny watching people who wouldn’t dream of raving about a mini burger going all ga-ga over them.
If you happen across some, or happen to make some, here’s what you can put on them. Or, if you want to party like it’s 1993, this mixture still works well on focaccia. It’s good for brunch, lunch or as a substantial canape.

Gently warm the bread or buns (wrap in foil and put in a low-ish oven for 10 minutes). Slice the buns in half and butter lightly.
Top with rocket, then wafers of apple, then chunks of salmon. Scatter capers on top, then dollop on a bit of creme fraiche or Greek yoghurt. Grind over lots of salt and pepper and serve immediately.