The day my mother died the nurses took it in turns to tell me how much I looked like her. It wasn’t really what I wanted to hear, given the circumstances, but I knew they meant well. A couple of days ago, looking through photos, I found one I’d never seen before. My mother is about my age (with eight more children than I have), sitting on a beach in Hong Kong in her togs, laughing. She has short, dark hair and she looks exactly like me. At least, I think she does.
While I have inherited our family photos, I have also inherited Mum’s folders of recipes, including a pretty notebook that features about five recipes for chocolate caramel slice written in several different places and a method for unshrinking a woollen jersey that involves Epsom salts and methylated spirits. I’ve added these to my own folders of recipes, which feature many of the same things cut from the paper. I can’t bear to throw these double-ups away. 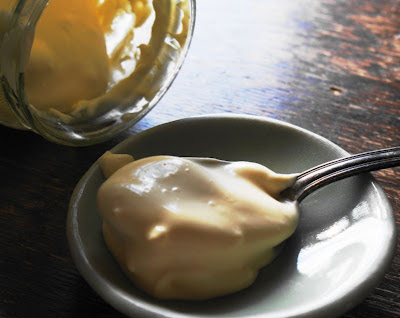 DIY Creme fraiche
While I was thinking about Belleau Kitchen’s Random Recipes for this month I found a handwritten version of this recipe in one of Mum’s folders. It was written on a piece of notepaper from the sort of notebook Mum kept in her handbag. When I was young I remember she would often serve up something she’d gotten halfway through noting down before being interrupted, worrying that she’d left something out. I fear the same thing had happened with this one – perhaps she heard it on the radio or mis-wrote the amounts? – because the first time I made it it didn’t work out. I’ve since fiddled with it and you can be assured that this version works.

Stir the cream and yoghurt together and cover, then leave to sit in a warm place for 12-24 hours until thick. Cover tightly and store in the fridge, where it will last for about two weeks. It’s heat-stable, so you can use it in sauces without fear of it splitting and it’s a tangy alternative to ordinary whipped cream on things like porridge or pancakes or other puddings.

What’s your favourite thing to do with creme fraiche?