Last year I made a decision: I was going to stop buying cookbooks. I was going to avoid the cookbook section at charity shops, I told my husband that I didn’t want the latest (insert title here) for Christmas or my birthday and I banned myself from lurking on Amazon late at night. I resolved to use the books I had (not to mention the bookmarked recipes from blogs) and go to the library.
That worked well – for a while. But then a few books came across my desk at work, I read blogs about upcoming titles and I couldn’t pass up a few opshop treasures. Before long I was in collection mode again. Oh well, I did try. 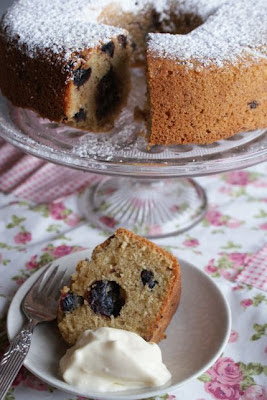 Chocolate Cherry Cake
One of the first acquisitions – the thin end of the wedge, if you like – was the Triple Tested Recipe Book by Thelma Christie, published in 1959 as a fundraiser for the Lower Hutt Plunket Society. I seized this as if it was a first-edition Elizabeth David, mostly because it was full of annotations and cut-out recipes from the previous owner. I was drawn to this recipe for lots of reasons, not least because whoever owned this tattered collection before me had crossed out various parts of it and added new things. I’ve continued this tradition, adapting it further to fit in with August’s We Should Cocoa, hosted this month by Janice at Farmersgirl Kitchen. As much as I love glace cherries (and whatever they are made from), I’ve used dried cherries here instead.

Preheat the oven to 170C. Grease and line a loaf or ring tin (lining a ring tin is easier than you might think and removes much of the anxiety of turning the cake out afterwards).
Sift the flour and baking powder into a bowl, then stir in the almonds, cherries and chocolate. Set aside.
In a large bowl, cream the butter and sugar until light and fluffy, then beat in the essences and brandy. Add the eggs, a bit at a time, beating constantly, then fold in the dry ingredients until combined.
Pour into the prepared tin and bake for 45-50 minutes until a skewer comes out clean. Let sit for 10 minutes, then turn out onto a rack to cool completely. Dust icing sugar over the top before serving with a nice cup of tea, just like Thelma would have done.

Have a great weekend, everyone. Does anyone know what glace cherries are made from? Do I really want to know?