Our fridge is like a reverse Tardis: it looks big from the outside but it actually has very little room in it. I think that’s what you call a design flaw. Anyway, it means certain large items, such as cauliflower, or watermelon, or bottles of champagne, have to be consumed as soon as they’re bought. It’s lucky we very rarely have all three in the fridge together at the same time. 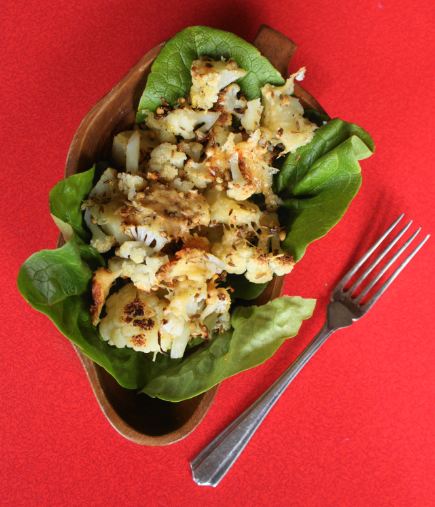 Roasted cauliflower cheese
Here’s a little something I whipped up for lunch at home last week when I realised the cauliflower I’d bought that morning wasn’t going to fit in the fridge. For extra carbs, toss in some par-boiled waxy potatoes with the cauliflower and spices. For extra greens, toss in some broccoli. This makes enough for two – extend or reduce quantities accordingly. Glass of champagne optional.

Heat the oven to 200C. Line a shallow-sided baking dish with foil. Put the cauliflower florets, olive oil and seeds in a large bowl and mix with your hands until the florets are well-coated. Tip this into the prepared dish and season with salt and pepper.
Bake for about 15-20 minutes, stirring until the cauliflower is golden and nutty brown in places. Scatter the cheese over the top and return the dish to the oven for another 5-10 minutes, until the cheese is bubbling and crisp.