Next time I plan to spend the weekend in the garden I’m going to check the weather forecast first. For instead of sitting on the back steps thinking about doing some weeding, I spent both days indoors, worried that either our roof was going to lift off or the windows were going to blow out.
The one good thing about being housebound was that I transformed a few basic ingredients into a magic loaf of bread. Who needs gardening, anyway? 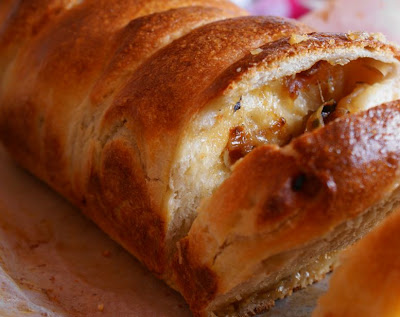 Secret cheese and onion bread
This magic loaf and its secret molten centre is inspired by Lora at CakeDuchess and her TwelveLoaves project with Jamie at Life’s A Feast and Barbara at Creative Culinary.
I’ve also used some of the principles I learned last weekend with Dean in making the dough, which are easy to do but slightly difficult to explain. There’s a very short video that shows how easy it is to knead this way.

Put the flour and yeast in a large bowl and stir well, then add the salt and stir again. Make a well in the centre and add the oil and water. Mix well with your hand until a soft, sticky dough forms. Tip this out onto the bench. Pick up one side of the dough, stretch it up, then bring it down again on top of itself. Repeat from the opposite corner.
Do this another three times, then scrape the dough from your hands and walk away. Seriously. Leave the dough to rest for five minutes, then come back and repeat the pick up and stretch process again. Then leave it again for five minutes. Do this process twice more, then scoop the dough into a well-oiled large bowl. Cover with plastic wrap and leave in a warm place for an hour or so, or until doubled.

While the dough is rising, cook the sliced onions in a tablespoon of olive oil over low heat, stirring occasionally. When they are soft, turn the heat up a little and sprinkle over a teaspoon of brown sugar. Let caramelise for another five minutes, then set aside to cool. 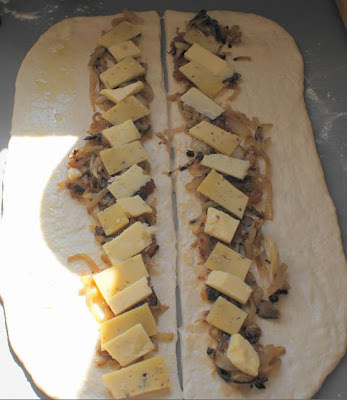 When the dough has risen, tip it out onto a lightly floured bench and roll out until it measures about 30cm x 40cm. Cut in half lengthways. Brush one side of each strip with olive oil, then spread the other side with chutney. Layer the cooked onions and cheese on top, then season well with salt and pepper. Fold each strip in half lengthways again to enclose the filling and press down to seal. Pick up the end of the folded strip and concertina it – as if you are folding a piece of ribbon so you end up with a square pile. Repeat with the other strip. Pack both gently into a large, well-greased loaf tin.
Cover the tin loosely with plastic and set aside in a warm place for 30 minutes.
Heat the oven to 200C. Brush the loaf with the beaten egg, then bake for 35 minutes, until well-risen and golden. Carefully tip out of the tin and let cool for at least 10 minutes before slicing.