I have been reading the most heartbreaking book this week about the childhood of writer Noel Streatfeild. In My Vicarage Family she describes growing up in straitened circumstances as the daughter of a vicar who was too busy thinking about godly matters to pay attention to the things that bothered his family, like having nice clothes to wear and decent food to eat.

Doing the right thing by the church and faith was paramount and there is a major fuss in the book when Noel and her sisters get invited to a birthday party during Lent. They are eventually allowed to go, but are not allowed to wear party dresses (not that they have any) or eat any birthday cake. The littlest sister, Louise, ends up eating some cake out of politeness but then dissolves into floods of tears fearing that she has committed a mortal sin. 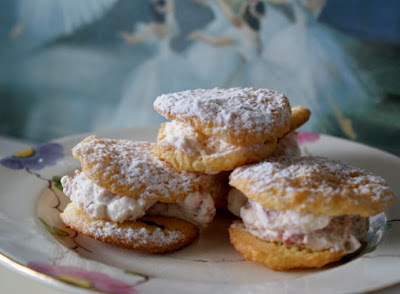 Noel was considered the difficult one among her four siblings and she acted out accordingly. The one bright spot in her life was her cousin, John, who at the part I am up to is talking about joining the Territorials before he goes to Balliol because his father thinks it will make him more of a man (John secretly wants to become an actor). It is 1914 and I have a feeling things are not going to end well.

I have been thinking about these vicarage children all week, which seems to have crossed over to my Random Recipe choice. This month Belleau Kitchen is joining forces with the Tea Time Treats juggernaut that is Lavender and Lovage and What Kate Baked for a ‘Tea Time’ edition.
I ended up with Margaret Fulton’s My Very Special Cookbook and after casually flipping to page 321, the word ‘vicar’ leapt out at me. 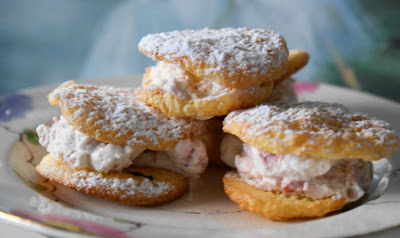 Powder Puffs
Margaret Fulton (the matriarch of Australian cooking, on Twitter and still churning out books in her 80s) says these were traditionally made when the vicar came to call. I don’t know any vicars and I doubt Noel Streatfeild’s father would have eaten anything so sinful, but I took a plateful of these to work and the godless hordes declared them delicious.

Heat the oven to 220C and line two trays with baking paper.
Beat the eggs, then gradually add the sugar (this is easiest with an electric mixer of some kind). Beat until the mixture is light and mousse-like. Sift the dry ingredients over the top and fold in gently.
Using a teaspoon, drop small rounds of the mixture onto the prepared trays. To ensure they are round, not oval, hold the spoon vertical so the mixture runs off the end of it, not the side (as if you were making pikelets).
Bake for six minutes, then gently lift off the trays and leave on a wire rack to cool. When they are cold, put in an airtight tin.
About an hour before the vicar is due to call, sandwich the drops together with a blob of whipped cream. This waiting time is important, because it gives the sponge time to absorb moisture from the cream and puff up. The ones in the photos above are only mid-puff, which is why they look a little floppy. Dust icing sugar over the top and assume a saintly expression.

Speaking of whipped cream, here’s a nifty trick I picked up from Dean Brettschneider. Whipped cream tends to separate when it’s left to stand overnight, but you can stabilise it with gelatine. I tried this the other day with the powder puffs and it worked a treat. Just dissolve 1 tsp gelatine in 2 Tbsp warm water. Let cool (but not set). Whip a cup (250ml) of cream until soft peaks start to form, then pour in the gelatine and a tablespoon or so of icing sugar. Beat until stiff – but not too stiff, you don’t want butter – then cover and refrigerate until ready to use.

Have a great weekend, everyone. If you’re at a loss for things to do, you could always pick up this knitting pattern… 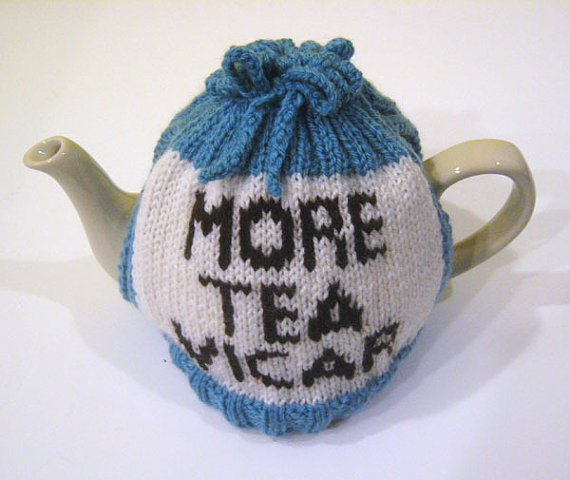