Regular readers of this blog – and visitors to my home – will be well-acquainted with the horror that is my pantry cupboard. I was pleased to see its chaos would finally pay off (or so I thought) for Belleau Kitchen’s October edition of Random Recipes, in which participants have to select a neglected ingredient from their storecupboards and make something with it from a randomly chosen recipe.

Just about everything in my pantry is a neglected ingredient. If it’s not in the front row of either shelf, it’s out of sight and out of mind. Choosing something was as easy as reaching past the olive oils and tinned tomatoes and grabbing the first package that came to hand. Choosing the book was simple too, since my bookshelves are nearly as chaotic as the cupboard. 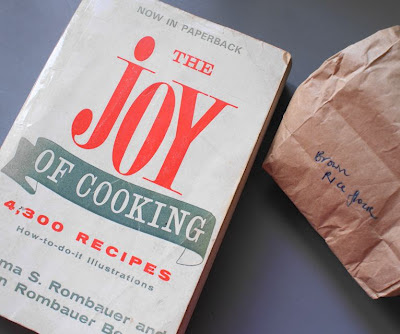 If it wasn’t for my handwriting on the brown paper bag I would swear that someone else had put this package of brown rice flour in my cupboard. I have no recollection of buying it and no idea what I was planning to use it for. I hoped that my fondness for my tattered paperback copy of The Joy Of Cooking would see me through. This book, first published in 1931, is a fascinating historical record.  I have a fourth-edition copy – there are now eight, with the most recent update in 2006 done by Irma Rombauer’s grandson, Ethan). I love dipping into it at random, partly to horrify myself with the recipes for things like ‘Variety Meat Patties’ (brains, liver, kidneys, among other things) and advice on how to prepare bear, beaver tail, raccoon or muskrat. Fear factor aside it’s actually still a very useful resource and I had high hopes that the Rombauers would see me right. I was wrong. 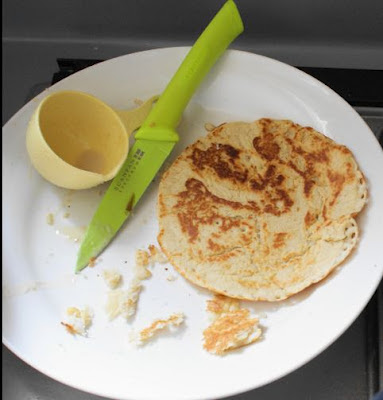 Rice flour griddle cakes
I had a funny feeling about this from the start. Recipes in The Joy Of Cooking are often prefaced with a line or two about serving tips or a dish’s provenance. The recipe for Sour Cream Waffles on the facing page describes them as ‘superlative’; the recipe for Crisp Corn Flapjacks comes with an amusing tale about them being renamed ‘Crepes Sauvages’ by a Parisian botanist. This recipe had none of that, so I’ll supply it:
‘These pancakes, with their gritty texture and unpleasant aftertaste, will make you run straight into the arms of a waiting omelette. Avoid at all costs.’
I don’t think I can blame the rice flour – can I? – and I’m pretty sure my technique was blameless. I even rested the batter for the suggested three to six hours first. It produced very thin, but somehow still slightly spongy, pancakes with a peculiar taste. I include the recipe here in the hope that someone else may have better luck. It’s supposed to make ’18 four-inch cakes’ but I gave up after making five and poured the batter down the sink.

Sift the flour, baking powder and salt together in a large bowl. Whisk in the milk and golden syrup until the mixture is smooth, then fold in the egg and melted butter. If possible, cover the batter and leave to rest for three to six hours. Cook as for pancakes on a greased, heavy pan. Or you could just pour the whole lot down the sink and make proper pikelets instead.

Do you have a well-thumbed copy of The Joy Of Cooking? Should I be grateful that I didn’t end up with the recipe for ‘Halibut Ring Mold’ or ‘Liver Dumplings’?