We have a bit of a joke in our house about ‘rich and compelling content’. It’s the sort of journalistic cliche used to describe a piece of work that’s often anything but ‘compelling and rich’.
A couple of nights ago, while proofreading something the Boy Wonder was working on (and grumbling to myself about it being no wonder that Shakespeare’s wife never got any praise), I consoled myself with a rich and compelling pudding that really does deserve the name. If you like the sound of a soft-set pumpkin cheesecake with a lid of chocolate ganache, then this is the pudding for you. 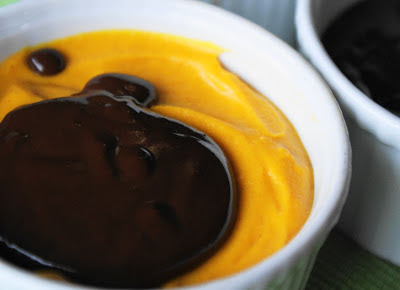 Pumpkin mousse puddings
Halloween doesn’t make much sense in the southern hemisphere – the days are lengthening and there’s not the same sense of lighting bonfires to chase away the darkness. Worst of all, there are very few pumpkins around. But I did manage to get hold of one for the sake of this month’s We Should Cocoa, which is being guest hosted by Nat at Hungry Hinny. Nat, who is looking after the blogging challenge baby of Chele and Choclette, has chosen pumpkin as the special guest ingredient.
There are three stages to this pudding, but none of them are terribly difficult or time-consuming and the end result is SO worth it. Leave the egg yolks out if you are concerned about eating raw eggs, but be advised that they do add a certain richness.

Heat the oven to 200C. Line a deep baking dish with baking paper. Put the pumpkin in the dish and drizzle with the olive oil, then dust over 2 tsp of cinnamon (reserve the remaining 1 tsp for later). Mix well with your hands, then cover the dish with foil. Bake for 30-40 minutes, until the pumpkin is soft. Set aside to cool.
When the pumpkin has cooled to room temperature, put it in a food processor with the cream cheese, egg yolks, golden syrup, cinnamon, ginger and salt. Blitz until it is a bright orange puree (you may need to stop and scrape down the sides several times). Divide this mixture between six small ramekins (or espresso cups), then cover and put in the fridge for at least two hours.
When the mousse is cold, put the cream in a small pan and bring to the boil. Remove from the heat and add the chopped chocolate. Stir until it melts and it forms a smooth, glossy sauce. Let cool for 10 minutes, then pour a layer of sauce on top of each mousse. Return to the fridge to set. Serves six (or one, depending on greed).