Last week I put a loaf of white death in my trolley at the supermarket and hoped no one I knew would see me. In our house, white death is what we call sliced white toast, the sort of bread you can eat without noticing. I was buying it at the request of the parents of my junior house guest, a 11-month-old colossus with blue eyes and a wide, gummy grin.

On Sunday afternoon, while the mini man mountain slept, I fiddled around with this antidote to sliced white – a loaf packed with the red quinoa and sesame seeds. Next time baby Jack comes to stay I expect he’ll be able to polish off the lot by himself. 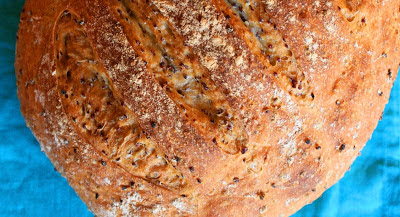 Quinoa bread
I’m very proud of this bread, not least because it was a total experiment. When I went to make it I realised I had just 500g of strong white flour left at the bottom of the 20kg sack. Rummaging around in the pantry for some more ingredients, I found a bag of red quinoa and a handful of sesame seeds, which reminded me of October’s #TwelveLoaves – which is all about making bread with nuts, seeds and grains. I thought about Elizabeth David’s rice bread but couldn’t be bothered looking up the recipe, so I just winged it, along with using the low-impact method of kneading. The results were delicious – a light, fluffy bread with a good crust and an interesting texture. Luckily I wrote things down as I went – here’s how to recreate this experiment at your place.

Put the quinoa in a sieve and rinse well under running water, then put in a small pot with 500ml cold water. Bring to the boil and let simmer until cooked – about 10 minutes. You’ll know it’s ready when the grains sort of separate out. Drain well, rinse again under cold water and set aside
Put the flours, sesame seeds and yeast in a large bowl and stir well, then add the salt and stir again. Make a well in the middle and pour in the oil and water, followed by the quinoa. Mix well to form a rough dough, then cover the bowl with a teatowel and leave for 10 minutes.
Rub a little oil on the worksurface, then tip the dough on top of it. Stretch and fold the dough in on itself about five times (as shown here), then leave for 10 minutes. Repeat this process three more times, then gather the dough into a ball and put into a large, well-oiled bowl. Cover with plastic and leave to rise until doubled – about an hour or so.
When the dough has risen, turn it out onto a floured surface and knock back gently, then gather into a ball. Place on a tray lined with baking paper and let rise for another 30-40 minutes, until it has risen and looks puffy. Use this time to heat the oven to 210C.
When the bread is ready, slash the top with a sharp knife and dust with flour, then slide gently into the oven. Bake for 30-40 minutes, until well-risen and golden brown.
Cool on a rack before slicing. This makes great toast the next day.

For more #TwelveLoaves inspiration, check out these posts – a poppy seed challah at CakeDuchess, a dense, cake-like quinoa and date bread at Creative Culinary and a lemon almond pecan quick bread at Life’s A Feast (the latter post is also worth reading if you dream of having a new kitchen installed).