Do you remember George Smilovici? He was an Australian comedian in the 80s, whose major hit was a monologue called ‘I’m Tuff’. The only line I could remember – “My rice bubbles are too scared to go ‘snap, crackle, pop’, they just sit in the packet and say ‘sssh, here he comes'” – came to mind last week as I searched the pantry for a bag of panko crumbs to dredge some fish in.
With no panko in sight, my eyes lit upon a packet of rice bubbles instead. To show them how ‘tuff’ I was I pounded them into submission to make a crispy, crunchy coating for some tender terakihi. That’ll teach them. 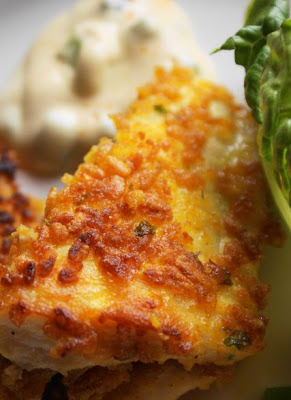 Crispy turmeric-crusted fish
I have spent a long time trying to come up with a nifty title for this fish, to no avail. Nevermind. It’s worth buying Ricies for, even if you never eat them for breakfast.

600g fresh white fish fillets, cut into manageable pieces
about 3 cups Ricies or other puffed rice cereal, crushed with your hands
1/2 cup cornflour (not to be confused with cornmeal)
2 1/2 tsp turmeric
1 tsp salt (because I’m a show-off – and we had some – I used some homemade celery salt)
2 eggs, lightly beaten
butter/oil to cook the fish

Set up a production line: put the cornflour into a shallow bowl, put the lightly beaten eggs in another and mix the crushed rice cereal with the turmeric and salt in a third.
Line a large platter with some greaseproof paper.
Dip each fillet into the cornflour, then the egg, then the rice cereal, then put it on the prepared platter. Repeat until all the fish is coated. Cover the platter loosely and put in the fridge for 20 minutes.
Heat a large, heavy pan and throw in a squirt of olive oil and a knob of butter. Fry the fish, a couple of minutes each side, until cooked. Serve with a dollop of DIY tartare sauce. Serves four.