I have developed a terrible habit over the last couple of weeks. I’ve been up to my eyes in work (hence a little less action here) and find myself spending far too much time hunched over the keyboard instead of dispensing (and enjoying) Christmas cheer. Instead, for relaxation, I find myself looking at shoes on the internet. More specifically, I find myself looking at a couple of amazing Australian websites that deliver free, practically overnight. It’s addictive, even if you don’t buy anything.

The other thing I have become addicted to is these truffles. The idea came to me, fully formed, a couple of weeks ago and I have become rather partial to a late-night one to get me through the last paragraphs of whatever I’m working on. 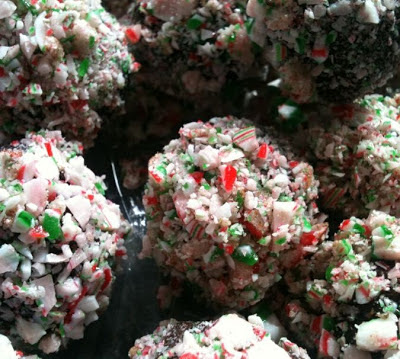 Put the cream into a saucepan and bring to boiling point. Remove from the heat and add the chocolate and butter. Leave for a couple of minutes, then stir well until it’s smooth and glossy. Stir in the egg yolk and peppermint essence until well mixed. Let cool for 10 minutes, then chill
in the fridge until set (about an hour).
While you’re waiting, smash up the candy canes. Put them in a strong plastic bag (like a ziplock bag) then put this inside another one. Using the end of a rolling pin or pestle, bash them to little gritty bits. Don’t go overboard, you want some texture.
Roll teaspoonfuls of the mixture
into balls, then roll these balls in the smashed candy canes. Keep in the fridge until serving. Makes at least 20, depending on how much mixture you eat in the process.

Have a great weekend, everyone. I’ve got two more commissions to finish and then it’s the holidays. Hurrah! x