A few weeks ago I had a ridiculous craving for sweet and sour pork. Ridiculous because I’ve not eaten any for years, let alone made some. So I turned to my collection of 1970s cookbooks (at last, they’ve been useful!) and made an approximation of their various recipes – which was as revolting as you might expect, with this sort of gloopy, cornflour-thickened sauce.

Last week though, I had another attempt. There was sweet (a ripe, juicy Australian pineapple), sour (lime juice and a few shredded kaffir lime leaves) and pork (free range Scotch fillet), plus some salty roasted cashew nuts for crunch. It was delicious, which proves a) you can learn from your mistakes and b) some things are best left to the mists of memory. 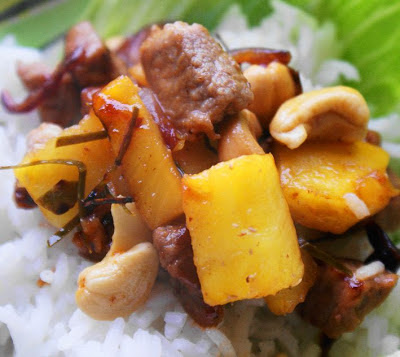 Pork, pineapple, cashews and lime
This is a really good mid-week dinner – it’s fast, good for you and feels like a treat. Chop everything up, put some rice on to cook and wash some crunchy lettuce leaves – cos, iceberg or Little Gem. Then quickly stir-fry the pork and other bits before scooping it and the rice with the lettuce. Making lettuce parcels is a good way to encourage recalcitrant lettuce eaters to get their fill of Peter Rabbit’s favourite greens. If you haven’t got access to fresh pineapple, leave it out rather than use the canned sort because that only tastes of tin.

Heat a large heavy pan and add the oil. When it is hot, add the garlic, onion, ginger and lime leaves and stir-fry for a couple of minutes, until golden. Tip in the pork and let it fry for two minutes before stirring around. It should be browned on all sides but don’t overcook it. Add the pineapple, cashews and sugar. Cook, stirring all the time, for another two to three minutes, until the pork is done. Remove from the heat and squeeze over the lime juice, stirring to scrape up the caramelised bits from the bottom of the pan. Sprinkle over the lime zest and serve with rice and lettuce wraps as detailed above. Serves four.