For this month’s Random Recipe Dom instructed us to get someone else to choose a recipe from their collections. I called on my sister-in-law Lucy – yes, two Lucys, married to identical twins, no, they didn’t find us at a dating agency – to do the honours and she did me proud.

“I picked the Leon cook book because you gave it to me and it is one of my favourite books. I honestly just let the book drop open and the lucky page was 226… Love me tender ribs.”

I’d forgotten all about giving her the Leon book, even though I remember introducing her to the tiny Leon on Carnaby St years ago. It’s been a long time since I made anything from the book myself, but I couldn’t believe I’d missed these ribs. 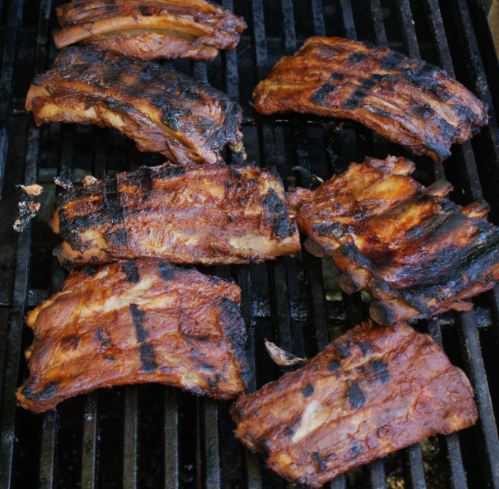 Barbecued pork ribs
I took some liberties with the Leon recipe – I couldn’t get baby back ribs but just asked the butcher to saw some up, which he did while telling me a story about playing Father Christmas at a children’s party. “I got out of the car and there was a huge scream, then I realised it was because of me!” But I digress. I simplified the sauce a bit and did the final cooking on the barbecue. If it’s not barbecue weather at your place, finish them off in a hot oven. Either way, these are super simple and delicious. The amount below is enough for four adults with some side dishes, though two Flintstones could probably devour them by themselves.

Put everything except the ribs into a large dish (big enough to hold the ribs in one layer) and mix well, Then add the ribs, turning to coat in the sauce. Cover with clingfilm and put in the fridge to marinate overnight.
The next day, heat the oven to 120C. Line a shallow roasting dish with foil and put the ribs on top, fitting them in like jigsaw pieces so they form one layer. Carefully pour the marinade in (between the ribs, not on top of them) and top it up with water so the liquid comes about halfway up the ribs.
Sprinkle the ribs with salt, then cover the dish with foil or a lid and bake for about five hours, turning occasionally. At this point, you can let the ribs cool until you’re ready to eat – in the fridge for a few days if necessary.
When you’re ready to eat, fire up the barbecue or heat the grill. Grill the ribs, basting with the sauce, for about 15 minutes, until they are piping hot and sizzling. Eat with your fingers, flatbreads, black beans and a cold beer.