This summer, more than any in recent memory, has been the summer of the barbecue. We’ve been firing it up at least two or three times a week since early December and it has to be our most-used cooking implement of 2013 so far. I’m sure there’s a moral in that somewhere, because it’s not in the least bit fancy. It was a wedding present, which makes it nine years old on Wednesday, and it’s about as basic as you can get. It’s also gas-fired, which lacks the romance of charcoal but has the advantage of being far easier to light. 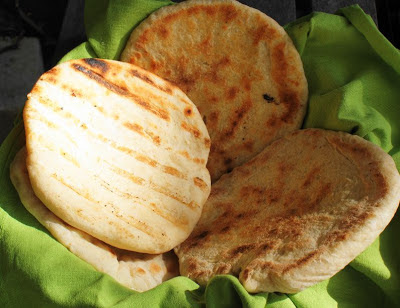 Barbecue flatbreads
These involve a bit more effort than non-yeasted flatbreads, but not much. They’re also nicer to eat and somehow seem a bit more substantial (which is quite handy if all of a sudden you end up feeding more people than you anticipated). I sometimes substitute 100g of the white flour for wholemeal, and use chilli oil instead of ordinary EVOO. Garlic oil would be great too. Little helpers enjoy ‘having a turn’ at rolling them out. 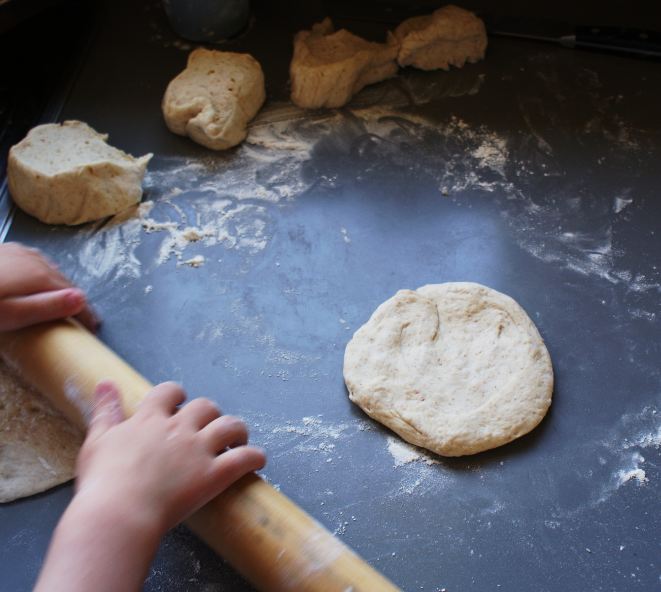 Put the flour and yeast in a large bowl and stir well, then add the salt and stir again. Make a well in the middle and pour in the oil and water. Mix well to form a rough dough, then cover the bowl with a teatowel and leave for 10 minutes.
Rub a little oil on the work surface, then tip the dough on top of it. Stretch and fold the dough in on itself about five times (as shown here), then leave for 10 minutes. Repeat this process three more times, then gather the dough into a ball and put into a large, well-oiled bowl. Cover with plastic and leave to rise until doubled – about an hour.
When the dough has risen, turn it out onto a floured surface. Press it out into a rough rectangle, then roll this into a sausage. Cut it into eight pieces.
Roll these out gently into rounds about 1cm thick (mine always end up a bit more free-form), then place on a floured tray. Cover with a cloth and let rise for 10 minutes, then take the tray out to the barbecue and cook the flatbreads on the hot plate for about two to three minutes each side. These are best eaten immediately, but you can reheat them reasonably successfully the next day (even in the toaster). 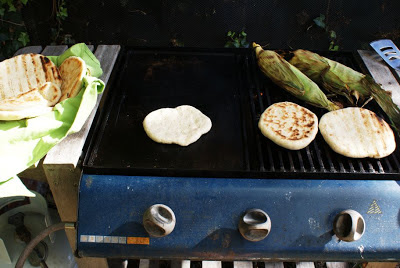