One of the Small Girl’s favourite things is the Colossal Squid at Te Papa. Have you seen it? It’s the only colossal squid specimen on display in the world and once you’ve gazed at all 495kg of it in the tank you can watch the strangely compelling video footage of it being caught, then transferred to the museum. There’s a 3D movie as well, but I’ve never managed to watch it because “no Mummy, it’s too scary”. One day, I’m going to go to Te Papa by myself and watch the whole thing.

Anyway, we talk about colossal squids a lot at our place. A couple of weeks ago I bought some baby octopus to sizzle on the barbecue and watching them wriggle around on the hotplate was so disturbing that it nearly put me off eating them. Thankfully, scored squid tubes don’t look nearly as lively during the cooking process and they taste just as good. 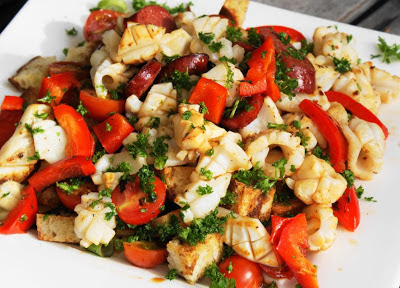 Calamari Panzanella
Apart from being so good to eat, squid is incredibly cheap. Make sure the ones you are buying have come from waters close by – the frozen Chinese stuff for sale in most New Zealand supermarkets isn’t fit for bait.
This started out as a classic squid and chorizo salad but soon morphed into something else. It’s not really panzanella, but it’s not far off.

Heat the oven to 200C. Toss the cubed bread with a couple of tablespoons of olive oil and put in a roasting dish. Bake for 15 minutes, stirring occasionally, until golden. Set aside.
Rinse the squid tubes, then dry with kitchen paper and lie on a board. Cut each one open so it lies flat, then score carefully with a sharp knife in a criss-cross pattern. Cut into 2cm x 5cm strips, then put in a bowl with the soy sauce, garlic, 2 Tbsp of olive oil, and some salt and pepper. Set aside.
Toss the toasted bread, tomatoes, peppers and parsley together in a serving dish.
Heat the barbecue or a large frying pan and fry the chorizo for a few minutes, until it is crisp. Scatter over the tomatoes and bread. Fry the squid for about 2 minutes, over very high heat, until it is opaque and curled up. Toss it through the tomato, chorizo and bread, then drizzle over the red wine vinegar and a little olive oil.
Serves four as a main course.