I invented this quick, delicious spaghetti when we were living in our first London flat. It was a neat place (if you ignored the crack house two doors down, the overland train out the back windows and the bus route out the front) and we had lots of visitors. Now we live in a house in Wellington that’s probably three times as big, with neighbours who play classical guitar and invite us over for dinner, with trees and sky out the windows. We still get lots of visitors, though they don’t look as frightened when they appear at the door. 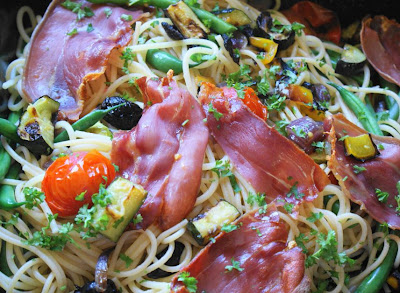 Spaghetti with roasted vegetables and proscuitto
This is a very vague recipe that can be altered to fit whatever vegetables you have lying around. In Finsbury Park I relied on whatever looked best at the 24-hour ‘Local English Mediterranean Superstore’ on Seven Sisters Rd, though I was careful not to buy any of the vegetables that had been sitting out in the traffic fumes all day.

Heat the oven to 220C. Put the onions, zucchini, garlic, peppers and beans/broccoli in a roasting dish and toss through the oil. Roast for 20 minutes, until they start to turn golden. Stir, then tip in the olives and tomatoes. Lay the proscuitto over the top. Return to the oven for another 5-10 minutes, until the tomatoes are at bursting point and the proscuitto is crisp.
While this is happening, cook the spaghetti in plenty of boiling salted water until al dente. Drain, then toss through the roasted vegetables. Divide between four bowls and top each one with the shards of proscuitto, grated Parmesan and finely chopped parsley.