At the moment I’m deeply involved in The Leopard, the famous Italian novel that charts the decline of a noble Silician family during the late 19th century. At a really basic level it’s a bit like a (less violent) version of The Godfather, or The Sopranos. Maybe all life is like that. Anyway, apart from the epic themes of struggle and change and death there are some great descriptions of feasts eaten and given. It’s one of those books where you know it’s all going to end in tears, but you’re compelled to keep reading. I highly recommend it. 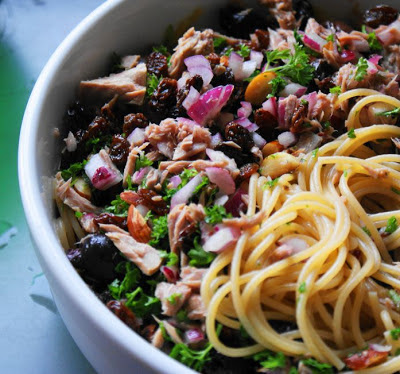 Sicilian spaghetti
I made this on Friday night, having opened the pantry and fridge and thought: ‘I only went shopping yesterday, why is there nothing to eat?’ It’s a really good storecupboard sort of dinner and is child-friendly too, especially if your child has a thing for dried fruit, tuna and nuts. I watched Sophie Grigson make it on TV once, about 15 years ago, and I’ve been making it ever since even though I’ve long since lost the notes I made of whatever quantities she used. This is how I made it on Friday night and it was a huge success.

Put the onion and red wine vinegar in a small bowl and leave to steep while you get on with organising everything else. Put the water on to boil for the pasta, and add everything except the spaghetti to the onion mixture. Toss together, add a slosh of olive oil and season to taste.
Cook the spaghetti until it is al dente and drain, then toss it through the sauce. Take a block of Parmesan to the table and let diners add it as they wish. Threaten any non-eaters with a horse’s head in their bed. Serves three.