When I was about 11 or 12 one of my favourite cookbooks was The Australian Women’s Weekly Chinese Cooking Cookbook. I don’t ever remember my mother cooking anything out of it, but we did eat out at Chinese restaurants and I based my whole understanding of the menu at Chopsticks and Hoo Wah on what was on offer in that book.
It was probably quite sophisticated for the time and it had all the information I craved on how to make curly spring onions and deep-fried ice-cream balls. None of which I can remember now, of course, but one image from the book has stayed with me. The star of the dessert section, apart from the aforementioned deep-fried ice-cream, was the chocolate-dipped lychees. Some 25 years later, I have finally made them. And boy, were they worth the wait. 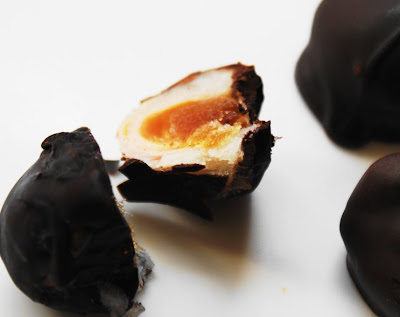 Chocolate ginger lychees
These couldn’t be simpler – or more delicious. The only thing you need to be careful about is draining the lychees really well. Handle them with care – dry them with kitchen paper like you’re handling a baby after a bath – and you’re away. Quantities are slightly approximate because some tins of lychees contain more than others. I’m sure you won’t be too stuck for ideas if you’re left with lychees, ginger or chocolate left over.
As well as being the ultimate trip down memory lane for me, this recipe is also perfect for this month’s We Should Cocoa challenge. The February We Should Cocoa is being hosted by Jen of Blue Kitchen Bakes, who has chosen ginger as the special guest ingredient.

Drain the lychees in a sieve, then dry carefully with kitchen paper. Leave them upside down on more kitchen paper to dry out while you melt the chocolate.
Melt the chocolate over gentle heat – in a double boiler arrangement is probably safest. Line a tray with baking paper.
Insert a piece of ginger into each lychee. Using a fork, a skewer or a dipping spoon, carefully drop each stuffed lychee into the chocolate and roll it around to coat. Remove from the chocolate and place on the lined tray. Repeat until all the lychees are coated.
Put the dipped lychees in the fridge to set firm, then transfer to a lidded container. Store in the fridge. They’re also good straight from the freezer – it’s like having a chocolate-ginger-lychee sorbet. Makes about 18.