I’m not sure what strict adherents to French culinary rules would think of this cake, but I’m rather partial to it.
I was all set to make a classic Reine de Saba cake – chocolate, butter, eggs, almonds – but then realised the glinting gold wrapper I spied in the back of the pantry actually belonged to a bar of white chocolate. Oops. By then it was too late: the oven was on, the Small Girl raring to go, so we just rolled with it. Take it from me that the white chocolate version seems lighter than her dark, moody sister, but no less rich. Actually, can you just take it from me? I’ve already eaten far too much of it. 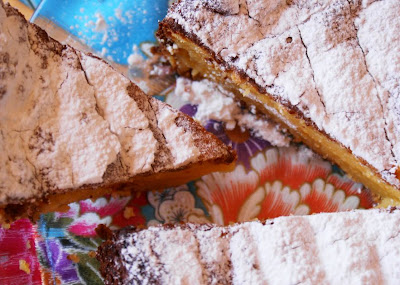 White Queen Cake
Given the French provenance of this recipe, it’s a good fit for this month’s French-themed TeaTime Treats extravaganza, hosted by ma petite chou Karen of Lavender and Lovage (with assistance from the lovely Kate of What Kate Baked). Even if you’ve never tried the traditional version, made most famous by Julia Child, give this one a go. It’s really eggy and almondy and dense and delicious, or delicieux, as the case may be.

Heat the oven to 170C and grease and line a 23cm cake tin, preferably springform to ease the stresses of turning it out later.
Put the chocolate, butter and sugar in a bowl that will fit comfortably into a saucepan of hot water in a double-boiler sort of arrangement. I don’t usually bother with double boilers but white chocolate is so temperamental and prone to seizing that it’s worth it. Heat gently, stirring occasionally, until the choclate and butter have melted.
Carefully remove the bowl from the pot and stir in the ground almonds and lemon zest. Beat in the egg yolks, one at a time.
Beat the egg whites until stiff peaks form. Scoop a large spoonful into the egg and chocolate mixture and whisk it through with a ballon whisk to lighten it. Tip the rest of the egg whites in and fold the two together gently, using an ‘up and under’ motion, until the mixture is combined and fluffy. You want to keep as much air in the mixture as possible.
Gently scrape the mixture into the prepared tin and level the top, then put it in the oven and bake for 35-40 minutes. Drape a piece of tin foil over the top of the cake if it looks to be getting too brown on top. It’s better to undercook than overcook a cake like this, so err on the side of caution.
Leave in the tin for 10 minutes, then turn out to a rack to cool completely. Dust with icing sugar to serve. 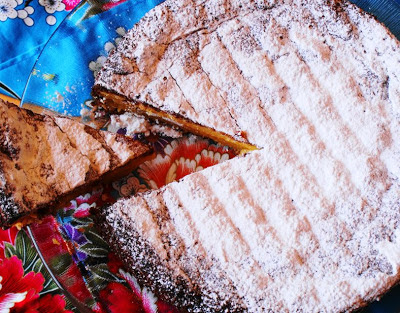 Have a great weekend, everyone. I’m going to be working and hoping for rain (but not while the cricket is on), in that order x 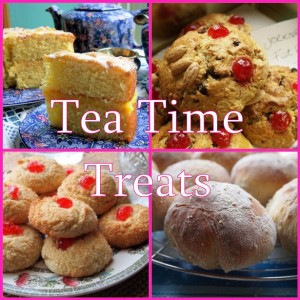