Last week I ended up with 14 egg yolks in my fridge. I’d like to say I had no idea how this happened, or that it was the work of a particularly talented flock of chickens, but in truth it was directly related to the three pavlovas that were cooking  v e r y   s l o w l y  in my oven. I’ll tell you about them another day.

In the meantime, I want to share with you what I did with them. First, I considered doing what my mother-in-law does and tipping them down the sink. Then I came to my senses and asked Twitter for advice. 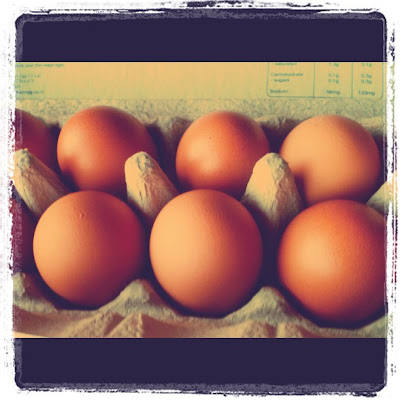 There were many suggestions relating to custard and hollandaise, but Jen of Blue Kitchen Bakes came up with the most useful tip: freezing them. I knew you could freeze egg whites, but making yolk iceblocks was new to me. Jen said to freeze them with a pinch of salt or sugar (depending on their final use) – so that’s what I did with eight of them.

Four then went into dinner – I’d forgotten what a seriously easy and delicious dinner spaghetti carbonara is: four egg yolks stirred together with a good splash of cream (maybe four tablespoons?), some Parmesan, some finely chopped parsley and some crispy bacon or ham tossed through hot spaghetti.

Two somehow ended up on the floor – oops – but if they hadn’t I could have made mayonnaise or used one as a face mask (egg yolks are full of vitamin A, which is found in all the best beauty treatments, don’t you know?). Or if we had a dog I could have mixed an egg yolk into its dinner for a pelt-improving protein boost.

But the next time I end up with a bunch of egg yolks – or at least 10 – I’m going to make like my lovely friend Andy suggested and whip up this creme brulee ice cream. Well, wouldn’t you?

What do you do with leftover egg yolks? Or whites, for that matter?