You know those smug, holier-than-thou people who announce they’ve given up sugar/caffeine/alcohol/oxygen? I’m not one of them. And I’m glad.
Yesterday I met a woman who told me about her bizarre bodysculpting diet and all I could do was feel sorry for her, despite the fact she could probably crack an egg between her thighs.
For her, food was just fuel – I suppose that’s the only way to look at it when you are eating seven ‘meals’ of broccoli, spirulina and tuna a day – which I thought was profoundly depressing. In hindsight, this explains why we met at a café where there was nothing to eat. And why she works in fashion PR. But I digress.
Despite not wanting to give up any of my vices, last week I gave an old recipe of mine a makeover – reducing the sugar, the oil, adding in fruit and using wholemeal spelt flour instead of white flour. It turned out pretty damn well – and completely different – which has made me wonder about changing a few other things. But don’t worry, I’m not about to become a bodysculpting fiend. Stripper heels and diamante bikinis aren’t really my style… 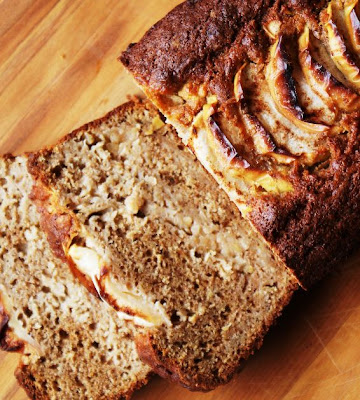 Spelt Apple Bread
I go a bit mad for apples at this time of year and frequently buy more than our fridge/bench can hold. I even dreamt we had an apple tree the other night and woke up cross at myself for buying apples when we had our very own tree. Anyway, this recipe uses four of them, which is a good start. A nice thick slice of this is a good on-the-go breakfast and it freezes well.

Preheat the oven to 170c and grease and line a large loaf tin. Put the eggs, oil, sugar, yoghurt and vanilla in a large bowl and beat well. Sift in the dry ingredients and stir gently to combine, then fold in the apple, rolled oats and walnuts.
Pour into the prepared tin and arrange the sliced apple on top. Bake for about 45-50 minutes, or until a skewer plunged into the loaf comes out cleanly. Let cool in the tin for 10 minutes, then turn out onto a rack to cool completely.

Have a great weekend, everyone. I’m hoping to plant some Chilean guavas and baby papaya trees in my garden, which must be as good for you as lifting weights, don’t you think?