A few months ago I was complaining to a friend that the rambling nature of our garden meant that if you suddenly realised you needed herbs or greens while cooking, you needed to go out the back door, down the path, around the corner, down the steps, onto a deck, down some more steps, down a vertiginous path, past marauding hedgehogs, to the vegetable patch. Then come all the way up again (if indeed you’d remembered what you’d gone down there for – I tend to go down, pull a few weeds out, sigh heavily and start back up the track). She looked at me wryly and said, ‘but Lucy, it’s a lot closer than going to the shops’.

I realised then that perspective has a lot to do with things. Take, for example, the hassle involved in making smoothies at home – or at least the hassle in washing the assorted bits of the blender or food processor afterwards. Once I realised that washing the bowl, the lid, the blade and the pusher-down thing wasn’t going to kill me, we started having smoothies for breakfast a lot. After all, it’s much faster than going to the shops. 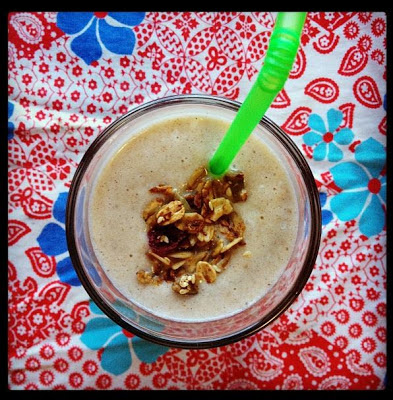 Apple crumble smoothies
If you live in New Zealand or England you are probably familiar with The Collective Dairy Co.’s apple crumble yoghurt, which somehow magically transports all those comforting apple-y, cinnamon-y flavours into  yoghurt. These smoothies do the same thing – without having to go and buy the yoghurt. Realising I could freeze sliced bananas has changed my life – not only are they great snacks but they are perfect for smoothies.
If you don’t have any stewed apple lying around, try a couple of very juicy, ripe pears or even (gasp!) a tin of  unsweetened apple sauce.

Put the banana, apple, date syrup, almonds and cinnamon in a food processor or blender and whiz until pureed. Keep the motor running and pour in the milk until it’s the right thickness. Pour into glasses and sprinkle some toasted muesli on top. Serves two to three.

Have a great week, everyone!